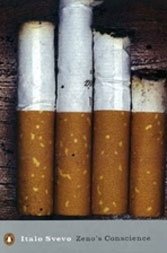 By Italo Svevo, translated from the Italian by William Weaver

eno Cosini is a Triestine yes-man set for life thanks to his father’s inheritance. He is also a chronic liar comically clumsy enough to surrender his “discreet” existence to a triumphal march of psychological distress, psychosomatic ailments and parochial self-loathing. That loathing’s principal tic is chain smoking, giving novelist Italo Svevo (nee Aron Ettore Schmitz) license to unfurl Zeno’s gregariously obsessive memoir (produced at the behest of his detested psychiatrist Doctor S.)

Zeno could be a 21st-century victim culture standard-bearer if only he hadn’t been created from late 19th-century clay. On the one hand, he’s a perfect ambassador of the modern — a passive and awkwardly spoiled petit bourgeois who can’t stop talking about himself (beware Zeno on Twitter). On the other, he’s an aim-to-please do-gooder who never seems to get it right.

All this comes back in detailed recollections that mock discretion by exalting its unhealthiness. Zeno tells of his stern father, adored but hated; of his loyal but ugly wife Augusta, picked only because her beautiful sister Ada ridiculed him. There’s Ada’s eventual husband Guido, a debutante businessman who is even more clueless than Zeno, and Zeno’s young mistress Carla, who stirs Zeno’s loins while accentuating his guilt. In passing (but appropriately) there’s also a dog — which Zeno kicks when no one’s looking.

Zeno’s period-piece remembrance is a burlesque of stricken values, appropriate since World War I will soon unhinges the landscape. Our limping hero is sincere, funny, sad and wholly unremarkable, a foot soldier in the never-never land that was the southern edge of the Austro-Hungarian Empire. He’s also wry (“Unlike other sicknesses, life is always fatal.”) and pessimistically prescient (man “will invent an incomparable explosive, compared to which the explosives currently in existence will be considered harmless toys.”)

Schmitz-Svevo was an Italo-German Trieste Jew who dreamed of literary fame, only to turn to business after two early (and fine) novels idled. He was coaxed back into the thick of the post-World War I literary circus by his one-time English tutor, James Joyce, who encouraged him to develop Zeno. Svevo (himself a chain smoker) seemed poised to take the leap into fame that blundering Zeno could not. But all that ended with a 1928 car crash. William Weaver’s zestful, alert and tunefully colloquial translation gives Zevo’s prose the vigor it deserves.