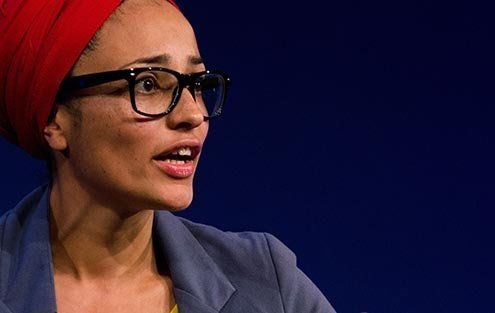 n a spinoff from linear memoir, the unnamed first person narrator of Zadie Smith’s “Swing Time” (Penguin Books, 2016) examines her life through a jagged lens. Episodes set in London, New York and West Africa connect random scenes from her lifelong friendship with Tracey. Both Tracey and the narrator are brown girls who grew up in the cauldron of London’s underclass housing blocks.

Smith’s sixth novel opens at the finish line. For a decade, narrator N has worked for white, globally famous singer-dancer Aimee. But when N’s hot sexual relationship with Lamin, her boss’s black African fiancé, is leaked to the press, N’s out of job.

Aimee’s gilded world had offered N a pseudo-identity. Without that bubble, she’s humiliated and made to think back to her haunted youth. Social media and emails carry abusive disgust. One message contains the kind of hateful prose you’d expect from a pre-adolescent child. N has no doubt who sent it, and soon she’s traveling down memory lane.

N and Tracey first met on a July Saturday in 1982, when both were about to turn eight. Though their bond is at the core of Smith’s potent tale, long chronological gaps and their subplots often shove the N&T story off the map. In these asides, Smith digs into a host of rankling social issues, obsessing and digressing along the way.

Smith has much to say about race relations and mixed marriages, poverty, wealth, celebrity and class. She also takes on the meaning of friendship, black identity, and even swerves into the lives of women in tribal West Africa. Perhaps inevitably, all these stretched-thin subjects get skimpy treatment.

Only when Smith returns to N and T does the novel leave a mark. Smith has an unerring eye for childhood traumas that persist through the years, as well as the emotional bongs they helped forge.

Once upon a time, little brown girls N and T met on the street on their way to an after-school dance class. N clutched the hand of her black mother while T had a white mom by her side. Both had freckles and lived in public housing. N was in a “better” block, with her obsessively ambitious African-Caribbean mother and white English father. Tracey’s poor, uneducated and unemployed white mother never got a wedding from her African-Caribbean father, who was constantly “away.” To disguise the pain of abandonment, Tracey claimed her father was constantly touring as a backup dancer for Michael Jackson. But whenever he was in jail — again — she was forced into “standby” mode, trying not to break apart inside.

Despite these differences, the girls are the only two brown faces in the dance class and they grow close. In their predominantly white elementary school, they’re the shame-filled victims of the white boys’ finger-in-your-vagina “game.”

Dance gives them escapist joy, and hope. Spending afternoons together, they repeatedly watch a film clip of Fred Astaire dancing in “Top Hat.” Tracey practices his steps. The less talented N is attracted to his elegance (“I liked the way it hid pain.”) The clip and the tap dancing carried them out of themselves and into an imagined better world.

A few years on, Tracey is a West End musical comedy dancer, but stuck in secondary, black girl roles. Broken self-esteem, rage and drugs deform her adult years. With no dance future, N grabs the demanding job with Aimee. Though she’s little more than a gofer, she fantasizes she’s “assistant number one.” She loses herself in Aimee’s needs. Like several actors in this novel, Aimee is typecast. She’s a cut-and-paste replica of the celeb that supports Third World causes but never follows up.

Smith’s important characters, like N, often don’t even get a name. N’s activist mother is an civil rights overachiever but emotionally cold. Her white father seems like a good enough guy — until his sexual shenanigans are introduced. Smith snubs Tracey’s mother is as crass white trash.

But it is Smith’s West African sections that glow with the kind of heat and sunlight absent from the London and New York scenarios. In contrast to the Anglo-American characters, those in Africa are deeply humane (though the reader is left to wonder how their lives may develop). Smith has more character lives to round out than one novel has space for. She gets around part of the problem by having both N’s and Tracey’s mothers die fairly young.

Loose ends aside, Smith is talented writer. She never loses control. At story’s end, N again links up with Tracey. And Smith rekindles the magic of their friendship. It’s may be a little late for that reunion, but it does allow Smith to close out a dramatic, digressive, and possibly overly ambitious novel.