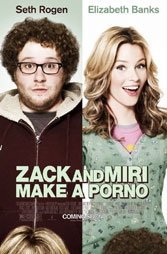 Since sweet Zack (no Cary Grant) secretly adores shy Miri (no Katie Hepburn) we’re off and running into a parodied world of sexual gags and teenage one-liners (“Where’s the clitoris again? Is it in your ass?”). Verbal defecation assaults romance and comedy. Sweetness is subtracted from.