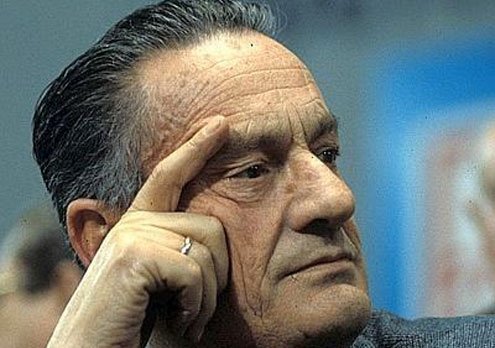 Benigno Zaccagnini was among the founders of the Democrazia Cristiana, the Italian Christian Democracy party
I

At a time when his dominant party was run by fistfuls of dour-looking schemers, “Zac” from Faenza was affable, even gentle.

He had the delicate task of running interference between the Christian Democrats and the advancing Communist Party, supporting the pliant policies of Aldo Moro, whose mid-1970s opening to the left eventually led to his 1978 kidnapping and murder by the Red Brigades. Moro’s middle-ground strategy frightened extreme left and right alike.

But what made Zac upright wasn’t political. Unspectacular, strong but soft-spoken, he symbolized a fantasy of pediatric unselfishness distant from the taint of back-room deals.

Avarice came ahead of vulgarity in the hierarchy of scandals. Money mattered more than sex. He came to office as major Christian Democratic leaders Mariano Rumor and then-President Giovanni Leone wrangled with bribery charges tied to U.S. giant Lockheed. Leone resigned as a result.

The Lockheed disgrace made a Zac-like figure all the more necessary, particularly since Communist success depended on accusing the Christian Democrats of producing a climate of corruption. The two sides had been exchanging insults, mild by today’s standards, for decades. The prospect of political theatrics whetted the daily appetite. “[Italy] is always in danger,” wrote American author Eleanor Clark in 1953, awed by the texture of Latin hysteria. “There is a premium on psychological monstrosity, not always exempt from plain nastiness.”

In that regard Mr. Clean afforded relief from the monstrous and the nasty. Invective was mostly ideological and intellectual. The prospect of populism alarmed Italy’s fascism-chastened intelligentsia and unions, lest demagogues fill the available breach. Zac’s quietude advertised the better side of otherwise muddled leadership.

Today’s political Italy is all that Zac was not, and the change is striking. Unfettered by the polite artifice that Christian restraint imposed, it not only entertains the monstrous but also appears unable to function without it.

Prime Minister Silvio Berlusconi’s shameless antics are Roman Empire throwbacks, as disagreeable as they are voyeuristically entertaining. They bypass the Catholic Church’s filter on political exaggeration, which ensured corruption always took the form of greed, a sin that could be confessed away more readily (and privately) than either vanity or lust, whose mesmerizing properties often transcend contempt.

The façade of Church restraint, at once hypocritical and rigorous, came unhinged in the 1980s, when political actors — literal ones — embraced the secular side of ambition and gradually pushed the Italian governmental mainstream toward a TV-powered marriage of Nero and Wall Street.

The elegant insincerity of Zac’s time — a paradox that ironically worked to restrain monstrosity — was replaced by vivid, freak-show populism intended to thrive outside ideology.

Berlusconi’s affinity for operatic cliché is remarkable in a country that until two decades ago was run by a party that consorted regularly with the Vatican and largely played by its modulating rules (rules that wouldn’t have permitted a national leader to publicly express his preference for hookers over homosexuals.) Now, the Vatican, already forced to make global account for priestly pedophilia, must excuse his behavior to sickness.

A temperamental cross between bad pope and deaf emperor, Berlusconi is incapable of apology or regret. He is the inadvertent ambassador for non-Christian model of post-moral sincerity. He swears by his own comic book.

As a result, Italian politics defers to the Latin luridness that the post-Borgia Vatican spent centuries trying to tone down, cover up, or wish away.

Writer Clarke, who in Rome saw a “vast untidiness” peopled with characters, once paused in front of the Italian senate and was struck by the “text of unity” that the building’s austerity appeared to suggest.

Italy’s few Mr. Cleans, Zac among them, were charged with protecting and promoting that text, polishing a credible make-believe. Pediatricians had a natural jump on professional narcissists. Witness Berlusconi, the most perfectly formed anti-Christian Democrat.

Honest Zac fell from political grace after Moro’s murder, after which he never really wanted back into a domestic scene that soon turned filthier than ever. He died in 1989 and his party met the same fate soon thereafter.

As for Clarke, the “text of unity” proved fleeting. A second look at the senate changed her mind. Maintain vigilance toward what in Rome appears as stately, she recommended, otherwise “… shabbiness, wreckage, unreason will pour in on you in a moment.”