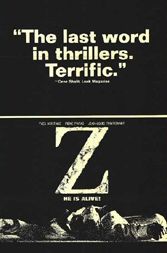 In an imagined but thinly-veiled country, progressive teacher and activist “Z” (Yves Montand) is assassinated at a peace rally (the banned letter “Z” means “He lives!”) To consolidate its power, the authoritarian regime behind the killing blames the murder on enemies of the state. This is Costa- Gavras’ fluid take on 1967 Greece, when the military, with CIA complicity, seized control of the country (Greece was an anti-Communist battleground). The catch is that investigating magistrate (Jean-Louis Trintignant) won’t leave well enough alone and begins digging.

Costa-Gavras effectively feeds on two genres: the anti-military propaganda piece and the thriller. He wears his political outrage on his sleeve, but the bias changes nothing — the movie is far too watchable. Trintignant is stalwart, Irena Pappas (Z’s wife) is at her tragic best, and Mikis Theodorakis supplies a memorable score.

If only the Michael Moores of the world understood that both propaganda and muckraking depend less on discrediting process than on the development of potentially heroic characters. Though the narrator announces early on that the military has banned toasts, miniskirts, strikes, press freedom, sociology, “Sophocles, Tolstoy, Euripedes, Aristophanes, Ionesco, Sartre, Albee, Pinter, Beckett, and Dostoyevsky,” none if it means much until individuals have to reckon with the consequences.