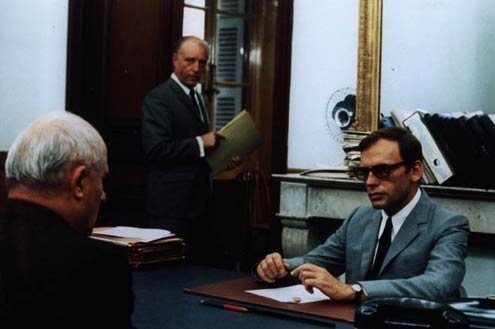 n an imagined but thinly-veiled country, progressive teacher and activist “Z” (Yves Montand) is assassinated at a peace rally (the banned letter “Z” means “He lives!”) To consolidate its power, the authoritarian regime behind the killing blames the murder on enemies of the state.

Released in 1969, this is Costa-Gavras’ fluid take on 1967 Greece, when the military, with CIA complicity, seized control of the country (Greece was an anti-Communist battleground). The catch is that investigating magistrate (Jean-Louis Trintignant) won’t leave well enough alone and begins digging.

Costa-Gavras effectively feeds on two genres: the anti-military propaganda piece and the thriller. He wears his political outrage on his sleeve, but that changes nothing — the movie is far too watchable. Trintignant is stalwart, Irena Pappas (Z’s wife) at her tragic best, and Mikis Theodorakis supplies a memorable score.

If only the Michael Moore’s of the world understood that both propaganda and muckraking depend less on any discrediting process than on the development of potentially heroic characters. Though the narrator tell us early on that the military has banned toasts, miniskirts, strikes, press freedom, sociology, “Sophocles, Tolstoy, Euripedes, Aristophanes, Ionesco, Sartre, Albee, Pinter, Beckett, and Dostoyevsky,” none if it means much until individuals inhabit the consequences.

Intellectual hardware needn’t always be political. Witness “Pi.” Stripped of its high-minded graininess (its molten core), Darren Aronofsky’s 1998 film is a nerve-wracking parable about the perils of thinking too much. Agoraphobic mathematician Maximillian Cohen (Sean Gullette, who co-wrote the story with Aronofsky) locks himself in his dingy New York City apartment to keep migraines at bay and scheme to order the universe using a supercomputer. If he can only get the numbers right, he can run anything and everything. Or so he believes. Alas, Max is going mad.

Aronofsky drills into black and white as cinematic code for disabled reality. As Max gnaws at himself, his paranoia increases. Is a Jewish cabal monitoring his work? In a bizarre tangent, his only relief from delusion is to play games of Go with former professor Sol Robeson (Mark Margulis). And down we go into Aranofsky’s favorite place: the cluttered basement of the short-circuited mind. This is an alarming film, and a worthy precursor to “Requiem for a Dream” and “Black Swan,” which also plumb the abyss.

Plumbing the Italian abyss in the early 1990s was the Main Polity (Clean Hands) corruption probe, which ultimately humble and dismember both Christian Democrats and Socialists. Moviemaking had pulse. In the 1991 “Il Muro di Gomma” (“Rubber Wall”), director Marco Risi (son of the late Dino Risi) did his crusading part by fictionalizing journalists Andrea Purgatori’s efforts to get at the truth behind the a famous and controversial air disaster. In June 1980, a DC-9 headed from Bologna to Palermo inexplicably disintegrated over a Sicilian island, killing all 81 people aboard.

Purgatori is transformed into a character named Rocco Ferrante (Corso Salani) in Risi’s fictional account. The whole thing is very Italian and conspiratorially chilling. Three decades after the disaster and more than two after the film, the mystery remains unsolved (despite a 5,500-page report released in 1999). The latest theory is the Itavia flight was caught in a clandestine cross-fire when French jets belonging to NATO attempted to shoot down a plane carrying the late Libyan leader Col. Moammar Qaddafi.