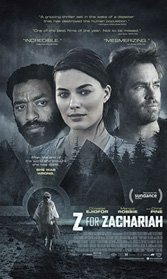 The biblical Book of Zachariah concerns exiles and rebuilding. It is apocalyptic literature spiked with hopeful pessimism. Craig Zobel’s film, based on Robert C. O’Brien’s book taps both these ingredients to create a melancholy film that places the end of days against the background of a sinister love triangle.

Rural girl Annie (Margot Robbie) is the lonely last survivor of a nuclear apocalypse. Daughter of a pastor she tills uncontaminated fields, until life appears in the form of John Loomis (Chiwetel Ejiofor), a research engineer who played some part in the conflagration and has sickened himself by bathing in radioactive waters. She nurses him to health, and the two drift toward Adam and Eve status in this pastoral if post-apocalyptic setting. He tinkers with mechanics and tries to restore electricity; she plows the fields. She’s believer; he is a secularist. She wants to keep her father small wooden church erect; he wishes to tear it down for wood to power a generator.

Their relationship builds slowly until another survivor — importantly a white man — appears. He, Caleb (Chris Pine), is strong, virile and attracted to Annie, which Loomis resents. When the church is finally demolished — an implied heresy — it’s clear the fraught act will affect the survivors. And that it does.

Though deliberate, even plodding, Zobel’s film gets heft from the magnificent Ejiofor’s deep and nuanced performance as Loomis, a man for whom still waters run deep, his generosity concealing hidden rage. Robbie’s Annie is eager to come of age but torn between attraction, doubt and loyalty to God’s plan, becoming a moody and alert foil to Loomis’ growing unease. Pine’s ambiguous Caleb is the flint that sparks smoldering fire. North, south, race, faith, and shifting definitions of morality all play a role in an actor’s film that exalts all those involved.