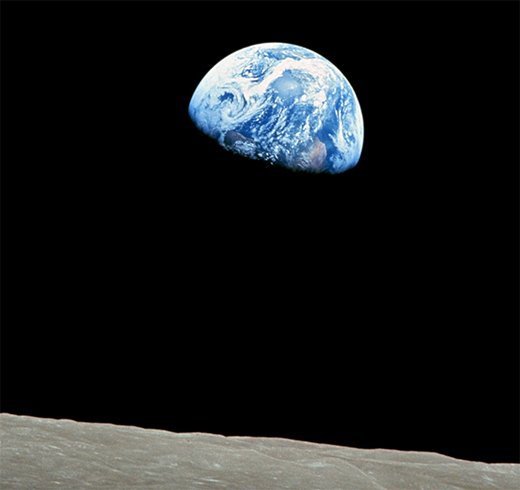 The crew of Apollo 8, Frank F. Borman II, James A. Lovell Jr. and William A. Anders, took turns reading from Genesis as they watched the Earth rise from the Moon at Christmas.
T

he year 1968 was a glutton for show-stopping events. Even 50 years later, its 12 tumultuous months contain events essential to understanding the flow of the second half of the 20th century.

The United States was in disarray, split by the Vietnam War and racial animosities. Early on, civil rights leader Martin Luther King Jr. was shot dead, producing riots that raged not far from the White House. In June, less than five years after the murder of brother, Democratic presidential frontrunner Bobby Kennedy was also assassinated. His newfound social activism and opposition to Vietnam had produced a growing groundswell of supporters.

In Vietnam itself, U.S. forces were losing hundreds of men weekly, shocking numbers in an undeclared war considered by some as foolish and futile.

In summer, Soviet leaders made uneasy by a reform-oriented Czech leadership —Prague’s was the first of many “springs”—moved in with tanks and troops, sweeping aside the upstarts.

Violence surged again in the U.S. when demonstrators disrupted the Democratic National Convention in Chicago and Richard Daly, that city’s tough-guy mayor, played enforcer, deepening public fears that the Vietnam rift might extend well beyond politics.

In the general election that followed, George Wallace, the unabashedly racist former governor of Georgia, won five states in the Deep South while running as an independent. His showing all but dissolved a conservative alliance that had long sided with Democrats. Wallace’s running mate, a decorated former Air Force general, more than once suggested using nuclear weapons to break the Vietnam deadlock.

Other events of all kinds further unsettled this mix. The American spy ship USS Pueblo was seized and held by North Korea, its captain tortured. Bombs detonated in Frankfurt were found to be the work of little- known radicals

Andreas Baader and Gundran Ennslin, the backbone of what would become the Red Army Faction, with the Italian Red Brigades soon to follow. At the Summer Olympics in Mexico City, two black athletes and gold-medal winners gave the black power salute and looked down as the national anthem played, an indelible television image whose power endures. Mexico itself was awash in anti-police, pro-democracy student demonstrations that culminated in the Corpus Christi massacre three years later. A leftist surge in South America intensified U.S. and European worry about potential communist inroads elsewhere in the West. In the Middle East, a year after a major war, tensions continued flare as the Palestine Liberation Organization stepped up its activities—in 1970 it would hijack three commercial jets at once. In Northern Ireland, the period to be known as The Troubles, took shape.

It was very much a bipolar world in which the righteous West fretted over the connivances of a tyrannical East.

Richard Nixon was elected president, riding a propaganda wave that suggested he represented the voice of the “silent majority,” white working-class conservatives, with all others portrayed as potential extremists.

In the context of such a year, Christmas, aside from greeting card bromides, brought muted joy. The planet, though as yet untouched by 24-hour social and professional media polemics, seemed inconsolably troubled.

Then, on Christmas Eve, came a twist of unusually moving proportions.

Three American astronauts entered the Moon’s orbit, a first, and sent back images not only of that orb’s desolate surface but also of Earth, which by comparison was oasis-like, a white, blue, green planet of arousing resplendence.

As the Earth rose, each astronaut read a verse from the Old Testament’s Book of Genesis, which contains the line, “And God said, Let there be light: and there was light.”

Light all now saw from very far away.

This, too, was propaganda, for the Judeo-Christian way of life, and for American Puritanism then up against heathen communism. The astronauts and their craft, Apollo 8, were portrayed as proud products of American technical ingenuity and pioneering fortitude.

But gamesmanship aside, the astonishment of these men as they witnessed the their own planet, “the good Earth,” rising from afar pushed even cynical earthlings past self-pity.

Briefly, very briefly, they inspired an emotion the planet can no longer seem to summon, at least not collectively: awe. The reflected the child-like marvel of human being, which is at the core of optimism.

Woe was suspended long enough to take in this surreal vision of the planet Earth.

This Christmas space ride represented a both a truce and a humbling, respite from a year gone wrong. The three men would come home of course, and so would the nastiness built into the species. would resume. Yet they had offered a “good Earth” intermission of the kind that are no longer available, let alone imagined, dimming the lights for all.