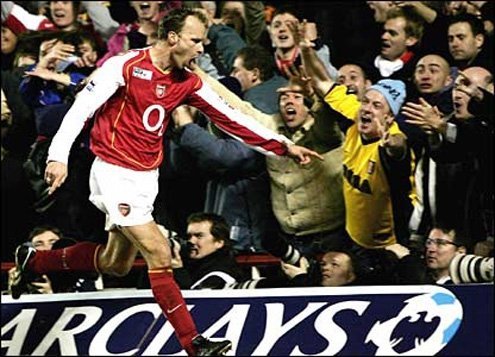 rom time to time I translate for an Italian company that wants to launch an online multilingual encyclopedia to compete with Wikipedia. The value-added will be video. My employers want to produce an online book of knowledge that gives readers not only data but appropriately tailored “videographies.” Each entry will also offer hyperlinks to Youtube clips.

I do this new-age work willingly because it’s interesting and forward-thinking and helps pay for my old-fashioned words-and-pictures-only website.

Occasionally, though, the shape of the future gives me retro pause. An entry on retired Dutch soccer star Dennis Bergkamp moves briskly through his teen years (noting that his father named him Dennis after Scottish star Denis Law) before pausing on a 1997 hat trick he scored for Arsenal against Leicester City. The quality and variety of the goals puts them high on the list of best goals ever scored by one player in a single game. “Spectacular” is the word the entry uses. The rest is left to a video.

Clicking on it, I’m mesmerized. Not only by Bergkamp’s remarkable moves, but by the fans, Berkamp’s own joy and that of his teammates. But I am also transported to 1997, the year of Hong Kong’s edgy turnover to China, of O.J. Simpson’s conviction, of chilling if forgotten massacres in Algeria that blurred the lines between Islamic terrorism and fraudulent governments. Memories provoke related clicks. What started with Bergkamp leads to a long and sinuous video tour. Hours pass before I return to the original entry, and then only because it’s my job to translate it.

The upside of a visual society is its rampant eagerness. Hearing tell isn’t enough. Seeing is what matters. Unfiltered and unrefined seeing determines common feeling. Response to video (and voices) marshals opinion. Television, which for decades represented managed viewing, is now confronted with its own demise. It’s a middleman some wish to cut out in favor of more unbidden reality.

But the omnivorous desire to make seeing into the most participatory public act conceals a side-effect: distraction. Distraction’s accomplice is the hyperlink, in essence a “come one, come all” hawker that invites online bystanders to refresh the previous 30 seconds with 30 newer ones so that computing becomes an ongoing journey through a excitable bazaar of moving pictures. The latest images are always the most indelible.

When distraction becomes its own focus, instantaneity merged with intelligence, contemplation is not only superfluous but dispensable. Context’s framework is blown apart by whatever just happened. And whatever just happened, transmitted online, produces additional visual links and correlatives.

It’s hard not to want to know a little about a lot when you can. It’s certainly easier than knowing a lot about a little, or even a lot about one thing, since voyeurism is more entertaining than expertise.

What happened to Dennis Bergkamp?

Well, I got distracted.

The text transported me to a link, then more, after which, overloaded, I fled by writing this essay. After all, Bergkamp entry was so hours ago. Excuse me if I strayed. Excuse me if slipped from Hong Kong to Algeria to the world’s sexiest models, sending an e-card in the tasked interim. Excuse me if I also Skyped a friend, who told me this story:

In high school, she had a favorite song by an obscure band. Its melody and imagining the handsome songwriter fueled early crushes. Hearing the song reminded her of growing up.

Then, a friend sent her a video. The obscure band had reassembled and toured, using its one hit as a lubricant. The video showed five portly middle aged men swaying wearily. She sighed.

When Bergkamp scored his goals I read about them in newspapers. They existed as myth. When others mentioned them, I conjured them in my mind’s eye, an antiquated concept. Now I’ve seen them. Now I know.

The problem is that I preferred the myth, and I now can’t get it back.