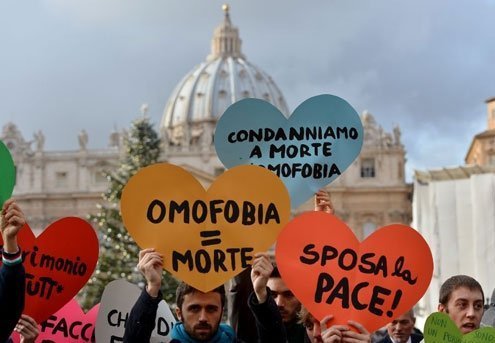 Hotel room discrimination is a backhanded but effective homophobic tool.
I

n the 1970s and 80s my parents were snowbirds. A “snowbird” is a Canadian who migrates south during the cold and dark winter months. Snowbirds are like penguins. They waddle along alone or in herds. The human kind have big gas guzzling cars with snow tires that they drive south at 55 miles per hour until they reach Florida or some other sunny U.S. paradise.

For snowbirds, an interstate Holiday Inn at the end of a long day’s drive is always a welcome sight. Besides being clean, friendly and affordable, it also has enormous American king-size beds, which the staff seems to assume any married couple checking in for the night would automatically want. But for my parents the king-size bed was never a draw. My father is a big man, well over 200 pounds, and a bit of an insomniac. Like Dick Van Dyke and Mary Tyler Moore in their 1960s sit-com, my parents slept in separate twin beds, which they had to request each time they checked in. The good folks at Holiday Inn were always pleased to accommodate them.

Switching to the present, Alberto had a medical congress in Bologna the other weekend. I love Bologna. It has a more down to earth relaxed attitude than Milan and it’s also the home of ragù Bolognese, one of my favorite dishes. I decided to tag along.

We’d reserved a room near the congress center just off the autostrada in… a Holiday Inn. It was next to Wiener Haus and a McDonald’s, so it fell a little short on Merchant-Ivory ambiance. But a 90-minute hike into Bologna’s gorgeous city center would be good exercise.

Alberto had a reservation and I’d be staying with him for two of the four nights. When the receptionist gave Alberto his room key card, we asked her for a second card. She looked at us as though we’d made an unusual request — or maybe the plastic cards were very precious. She finally handed us the two cards in an envelope that read, Welcome.

In the room were a twin bed and an already made-up IKEA-like foldout bed beside it. The two filled the entire room, leaving almost no floor space. I flicked on the TV and the screen read, Welcome. I opened the curtains to find I had to stand on my toes to see out the window. It looked out over a gravel-covered roof with what appeared to be a dead pigeon in the corner. I didn’t feel welcome.

The next morning, before breakfast, I told reception that I wanted a different room with a “matrimonial” bed, which they promised by afternoon (matrimoniale is the Italian designation for double room). The new room at least had an unobstructed view and two twin beds separated by a nightstand. We already knew the drill. Alberto dragged the nightstand to the corner while I shoved the twin beds together. At night, in our pushed-together beds, we snuggled across the divide. Each morning, the cleaning staff would return things to their proper order.

Both Alberto and I have had more than our fair share of nasty little rooms with nasty little beds overlooking garbage bins. According to my friends, I’m not the only gay person that suspects he’d being relegated to the “shitty room without a view.” It’s a problem in many hotels throughout the country. They have no problem accepting credit cards, but take an anything but a pro-active approach to making their LGBT guests feel welcome.

If you’re an LGBT person and thinking of coming to Italy for a romantic trip with the man or woman you love, be forewarned. If you’re a same sex couple and you don’t insist on a “matrimonial” bed you’re making your reservation, you’re likely to end up with twin beds. Even if you do reserve “matrimonial” accommodation you may still find yourself pushing two twin beds together. This may not be quite as romantic as you’d imagined. Whatever you do, don’t expect anything like those mythical American king-sized beds. Hey, this is Europe, after all.

Generally speaking, Italian hotels take a “don’t ask, don’t tell” approach to gay couples. By not asking what kind of bed two men or two women would prefer, the hotel staff adopts the default attitude of treating LGBT people like second class citizens so as to not risk offending the delicate sensibilities of potentially homophobic guests. After all, LGBT people are used to being treated like second class, aren’t they? The best way to deal with a “don’t ask don’t tell” attitude is to reject playing the game. Let them know that if they want to see the color of your credit card you expect to be treated as a couple. You’re welcome!

And for hotel owners and managers who are genuinely unaware of the little games some staff plays with LGBT guests, it might be time to wake up and smell the complimentary coffee.