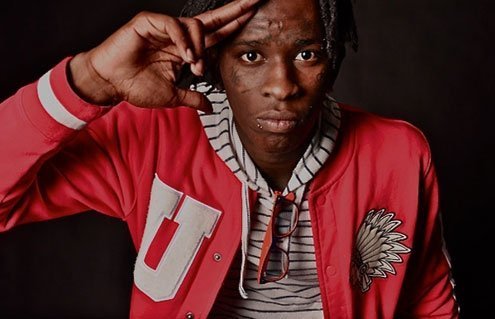 hat makes hip-hop “supremacy” such an enticing and endlessly entertaining discussion is that the genre’s inherent reliance on location makes any “who’s best?” debate impossible to resolve. Without local slang and culture to inform the music, an artist’s personality and subsequent appeal can be lost to the ephemera of multi-market major label agendas and flavor-of-the-moment freestyles with limited returns.

Atlanta, Georgia’s Young Thug doesn’t have that problem. And he’s the most magnetic rapper on earth right now.

If you’re familiar with the current rap landscape, you probably already know this and you’ve likely already worn out his latest mixtape, 1017 Thug 2 (1017 Brick Squad). But the fascinating thing about the man born Jeffrey Williams is that if you don’t know what’s going on in hip-hop right now, you may have missed him entirely because of the politics surrounding the very thing that makes his appeal so great.

The drama of his label situation was reported at great length in a handful of opinion pieces earlier this year. The gist is that Thug was originally signed to the 1017 Brick Squad imprint of his mentor, fellow Atlanta rap weirdo Gucci Mane. When Gucci went away to jail last September, Thug took things into his own hands and signed a separate deal with Atlantic. Then came the endlessly manipulative-yet-opportunistic Birdman’s Rich Gang Records. Wires got tangled and lawyers have been trying to extricate their respective parties from the wreckage ever since.

The thing is, no one would’ve cared about signing Young Thug if he wasn’t a powerful presence. Atlanta’s streets already knew as much when last winter’s hits “Danny Glover” and “Stoner” started taking off. Now everyone‘s talking and the conversation revolves around a rapper who is, effectively, hip-hop’s invisible hand: often heard, rarely seen.

Like The Purple Tape and Young Thugga Mane La Flare before it, 1017 Thug 2 lacks any promotional machinery and likely flew under radar because of the label volleying. The production quality is about the same as Black Portland and better than the original 2013 1017 Thug. But the way Thug talks about Brick Squad suggests these are older tracks.

Their dates notwithstanding, the work continues in a long line of releases that showcase his talent. Young Thug exists at the nexus of a handful of thoroughly modern sonic influences. You’ll recognize the croaking laugh and memorable ad libs from vintage Lil Wayne; the counterintuitive AutoTune croons from Future; and the bizarre unpredictability of none other than Gucci Mane. Though he is akin to Atlanta contemporaries Rich Homie Quan, Travis Porter, Migos, and Que, he is not of them.

Thug can sing an addicting hook (“Oh Ya” is one example, “#TwitterSong” from 2011’s I Came From Nothing 2 another) but he’s at his best when rapping. He can sound unhinged (“Picacho”) or controlled (watch how he apes Drake for the opening bars of “The Blanguage” before going off the rails on his own). There’s also the vaguely desperate way he spits his bars – though unhurried, his verses sound like he’s being choked out (most recently on Rich Gang’s “Lifestyle”).

Which, in its way, is the best kind of delivery to communicate his worldview. From label limbo to erratic business partners to his own self-destructive carelessness, Young Thug feels like this moment’s Icarus. If he’s rapping like every breath might be his last, it’s only because he’s inhaling thinner air. His sphere is closer to the burning sun of greatness. All we can do is sit helplessly by and listen.