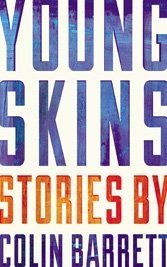 Colin Barrett’s brilliantly aggressive stories feature twenty-something Irish townies (“young skins”), nowhere adolescents and nowhere men, man-children and murderers, muscle and their molls. He evokes the “grievances and depletions” of parochial losers with a violently unsentimental steadfastness that both wounds and cleanses, a remarkable combination.

So many characters in this superb debut collection are pub-addled “acquiescent fuckers” and kind-hearted thugs, walking last resorts unlikely to “come out the other side of their damage.” Many seem docile while just as many are impulsively capable of “ferocious turns.”

There’s big oddball Tug and little oddball Jimmy, one willing to overturn a car to redress his friend’s jilting. There’s mangled Bat, a loner once battered by a hoodlum who lives with his mother. A prisoner of laconic solitude, he will fall for an underage girl but ultimately leave “the humans to the humans.” There’s Val, “senior bouncer at the Peacock Bar and Niteclub,” whose fling with college-girl Martina can’t reconcile their separate galaxies. There’s Matteen, the “town’s premier pool shooter,” and “sidekick or flunky” Teddy. Lovesick Matteen’s still crazy about maddeningly tall Sarah — who “euthanised” their one-time relationship — but she’s being eyed by local gangster Tansey. “The hogging nimbus of Sarah’s beauty” — consider the image — will soon tear up the sexual script.

The longest of this seven-story lot, “Calm With Horses,” settles on a young man known as Arm — Thomas Armstrong — muscle for weed-dealing Dympna and his two gun-toting lunatic uncles. Former boxer Arm beats up those he must while doting on his autistic son Jack. Much smolders around Arm until things suddenly “get fucked, precipitously,” and all again comes apart.

Barrett at one point describes winter as “a long, hard reprisal, exactly meted.” That is what these very Irish stories are: a hard meting out of small and large reprisals. Barrett meticulously assembles kindling around his characters before lighting a series of pyre, the consequences remarkable to behold. Deserved winner of the Guardian‘s 2014 first book prize.