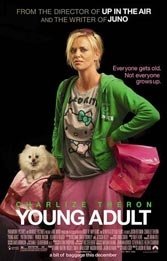 Pushing-40 “young adult” romance novel hack Mavis Gary (Charlize Theron) is a leftover high school beauty parked in a big city (Minneapolis) where she’s little more than an afterthought, both to herself and the men she casually sleeps with. She also a self-destructive, depressive alcoholic who measures life’s day-to-day in stunted, narcissistic twitches, with celebrity TV as her mental soundtrack. She has a dog named “Dolce,” but sweetness eludes her.

Then comes an email from married ex-flame Buddy (Patrick Wilson), his new baby resplendent. A sense of being left behind produces a 1990s time warp and rekindles her “psycho prom queen bitch” side. A monster on the loose, she decides to drive her Mini Cooper home to backwater Mercury, Minnesota and win Buddy back, diving headfirst into the love-conquers-all romance book world in which her characters always get the boy. Her surreal wooing comes despite the best efforts of “hate crime”-crippled former high school classmate Matt (a deft Patton Oswald) who’s always loved her and whose badly damaged limbs give him insight into her ferociously damaged psyche. “You don’t know shit about being an adult,” he tells her, and he’s right. But she’s interested only in Buddy-plotting. They drink together and Matt becomes an unwitting accomplice to her entitlement.

Mavis is voraciously but vacuously self-involved, her self-esteem at once overworked and broken. Her rage, at 37, is the pathetic south side of Sweet 16. Theron conveys Mavis’ pampered cynicism with shocking conviction in a performance that burrows deep into the complications of human stalling out and self-pity.

Few are the American movies that make a pact with both derangement and empathy while refusing sentimental trap doors. Rarer still are performances like that of Theron, who brings a troubled and disagreeable woman to life and loyally sticks to her tics from start to finish. Director Jason Reitman and writer Diablo Cody last collaborated on “Juno,” a generous but far less savage — and rewarding — film. Here, what funny-ness exists often runs for cover. No, you can’t go home, let alone back, again.