You Old Son Of a Bitch… 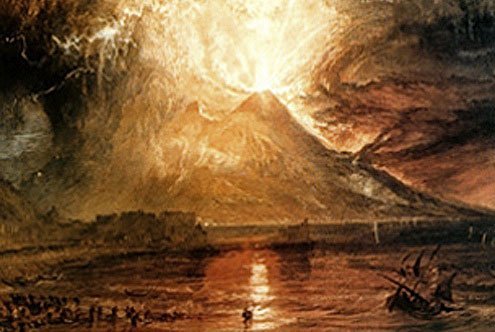 Everyone knows that we had a bit of a tiff in 79 AD and that I got a little upset (I’ve told you that I was sorry).
D

ear Pompei: You old son of a bitch! How the hell are ya? It’s been, what, almost 60 years now? How time flies…

You look great, by the way. That whole ancient Roman thing is really working for you. And the dead Romans is an especially nice touch. Nice work. Really. I’m almost envious.

But I’ve got a gripe.

And I think you know what it is.

Let’s be honest. I mean, after all the time we’ve spent with each other, I think we owe ourselves at least a bit of honesty.

So, here it goes…

Without me you would be nowhere today. Nowhere.

You would be like one of those nowhere towns like Leopardi or Torre del Greco or some of the other ones that I can’t even remember the names of. So, let’s give credit where credit’s due.

And I’m not talking about in print.

Everyone knows that we had a bit of a tiff in 79 AD and that I got a little upset (I’ve told you that I was sorry). Any tourist with a guidebook can figure that one out.

All I’m talking about is a little, “I scratch your back you scratch my back.” I did a favor for you. The least you could do is throw a guy a bone.

But no, you look the other way. Shame on you.

And don’t pretend like you don’t know what I’m talking about. I’ve heard the rumors. I’ve even seen it myself.

The complete lack of directional signs to the buses that come to me? Ring a bell? Hmm? How about the sheer absence of postcards with my face on them? You can have postcards with pagan gods with three foot shlongs on them, but you can’t even sell one postcard of your buddy Vesuvius?

All I’m asking for is a sign or two.

It doesn’t have to be anything complicated, just something that says, “Buses to Vesuvius” with an arrow in the right direction. And when I say “right” I mean “correct.” Don’t try anything tricky.

And I don’t want to hear any of that bull, “But I didn’t know that people wanted to go and see you.”

I’m tired of excuses. You know that people are coming to see me. Don’t pretend that you don’t.

Like what? Do you even have to ask? How about when you raised the price of the bus ticket from €4 to €8.60? Hmm? Was this out of jealousy? Were you worried that if you kept the price at a reasonable level that people would want to see the most dangerous volcano in Europe before they saw the little town it threw up on?

Come on, buddy. Rivalries like this only hurt. Don’t do this to us.

OK, I do have to admit that you showed a considerable amount of maturity when you produced those bus schedules outlining the schedule of how to get to me. That was big of you. Also, I, and from what I can tell, everyone else appreciates the price charts for the tickets. The comment I think I’ve heard most about them is, “At least I know I wasn’t getting ripped off by the guy selling the tickets.”

On behalf of all of us, thanks.

And while I’m handing out the compliments, let me congratulate you on your positioning of your tourist office. Tucking it away from the chaos of your main (only? Ha ha, just kidding) tourist attraction is prescient. Good for you. Also, having the bus to me make its stop at the office shows a considerable amount of intelligence. I mean, if any of the tourists had a question about the bus, or your ruins, or whatever, they could just pop in and ask away.

At least in theory.

And I don’t like being a tattletale any more than I like being a whiny bitch, but you really need to do something about the people in that office. They’re giving you a bad name. They turn out all the lights and close the door to make it look like they’ve closed. Those sneaky devils! And all those poor ignorant tourists needing and wanting tourist advice haven’t got a clue! Poor bastards.

Let’s be honest. Between you and me, and you know this because I’ve seen you, tourists need all the help they can get.

Don’t get me wrong, tourists are intelligent people (wink, wink), but when faced with the unknown they (oh, how to say it?) act like a pack of deficient seals. They need all the help they can get. You’ve neglected them for too long. Again, shame on you.

And don’t try and turn this around on me.

I help my tourists out, thanks. I provide everyone who buys a ticket with a free tour guide. What do you do? You make the people swim through your gates, filled with leaches barking out hourly rates for tours, and then you make them pay €10 just to get in! And what does that get them? A map corresponding to nothing found in the ruins and a swift kick in the ass by the guy checking the tickets.

Is this respect? No. It isn’t even good business. Where do you get the nerve?

You better shape up, buddy. I’m watching you. You need to start throwing your buddy the volcano some love. Put up a few signs.

Sell a few postcards. It isn’t much to ask for immortality.

Give my love to Herculaneum.