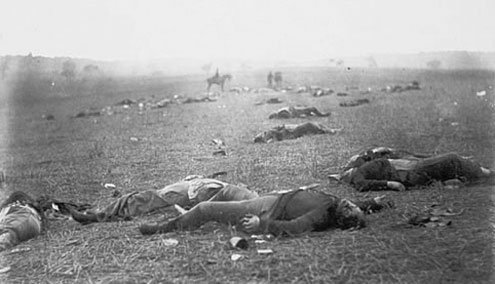 yperbole is as old as Washington. So are polemics and rhetoric. Style, introduced more recently, hitched self-respect to sensibility, the alternative to which was a return to grunting.

Grunt made its swan-dive breakthrough during the recent State of the Union message, when an angry lawmaker wilted decades of protocol by shouting “You lie!” aloud. Apologies followed but the die was cast.

Political critics of Barack Obama’s landmark health care package have followed in the “you lie” vein. Robert Moffitt of the Washington-based Heritage Foundation called the measure “the beginning of the next phase of this 100 years’ war.”

The failure to win cathartic battlefield wars together with economic humbling have helped return American resentment and acrimony to the lynch-mob perch it occupied before World War II.

Insult has reacquired relevance in an online age that depends on saloon brawls for affirmation. The greater good, once known as the commonweal, now lacks the ideological safeguards that kept it intact throughout the uneasy Communist era.

That old-school commonweal necessarily reined in vendetta, since by definition it transcended petty grievance, or limited it, to provide a united face before larger enemies. The national good, right or wrong, wisely or deceitfully perceived and portrayed, always came first.

But the new purpose is entirely factional, even gang-driven, and gangs depend on a familiar lingo of insult to issue claims and to deprecate outsiders, using insinuation and mockery to warn of real and imagined encroachments.

The hysterical language associated with the passage of the health care package — pro and con — also reflects the centrality of volume in American society. Pluralism is populism and vice versa, and multi-media its indiscriminately celebratory vehicle.

Use of a bully pulpit isn’t new. It proliferated in the 1930s, when Jonathan Edwards-style evangelists radioed their fervor East-to-West. But this passion was in part offset by Franklin Roosevelt, whose sturdy fireside reassurances kept the manifest bullying at bay, or in context, after which came Pearl Harbor and a two-front war’s unifying onset.

In the ideological postwar, public debate was often cruel but usually civil, lest the United States seem politically and socially vulnerable to its megalomaniacal (and Godless) enemy, the Soviet Union. Fear of nuclear war put diplomacy ahead of outburst.

Now, a decade after the September 11 terrorist attacks, which briefly diverted attention to a pantheon of ill-defined enemies, Americans again have only themselves to fight.

Potential advances offered by the health care bill are categorically refuted by dissenters whose identity depends on demonizing what they dislike. There is no middle ground. Nor is it a left-right issue. Critics of George W. Bush and his cadre didn’t lack for spite.

The civil in-between, which moderated extremes, lost influence and meaning as totemic enemies fell away after 1989, and collapsed entirely with the Clinton sex scandal, which made public recklessness entertaining.

The venom of prewar isolationism, nipped in the bud by the World War II itself, returned to the mainstream riding the Internet’s jet stream.

So it is that the epochal conflict mentioned by Moffitt is not so much a war but a cancer, with the body politic snacking on its own parts at will. There are noble winners, no gracious losers. Business as usual is bitter, and bitterness a narcotic measure of being. Obama’s most stalwart supporters ironically rue his reluctance to play by the pit’s new rules.

But politics can’t be seen independently from the disapproving assertions that nourish it. Malicious wrangling flourishes when discontented audiences begin to live for the next big disagreement, choosing among quarrels and complaints to give life its daily meaning. A nation is thus united by its collection of feuds.

Those who resent such vulgarity and its dimensions have plenty of high ground to occupy. At the same time, they’re well advised to remember that the United States once produced a civil war as bloody as any in modern history.

When outside enemies wane, a national cannibal takes its democratic place before mirror and basin, cleansing its hands, only to extract a knife.