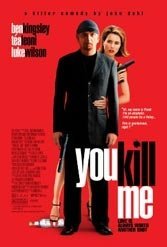 John Dahl’s quirky little charmer goes like this, sort of… Booze has gotten the worse of Frankie Falenczyk (Ben Kingsley), once a sure-thing hit man for Buffalo’s snowplowing Polish mob (what else?). These days Frankie falls asleep on the job. His boss Roman (Philip Baker hall) banishes him to San Francisco for rest and AA. Problem is that the plowing Poles are under assault from the Irish mob with help from the Chinese. And the Greeks are no help. But that’s beside the point.

Roman’s San-Fran connection is a real estate developer named Dave (a self-mocking Bill Pullman) who ensures that the gruff, laconic Frank attends AA meetings and gets him a job in a funeral parlor. At AA, he’s befriended by a gay tool both inspector named Tom (Luke Wilson); at the parlor, he falls for a deadpan client named Laurel (Téa Leoni) who says things like, “The word ‘no’ means nothing to me.” The comings and going of the strange troika makes Dahl’s understated, not-quite-screwball comedy an unexpected delight with Kingsley’s goofy but lethal moodiness adding a hard pinch of gallows humor, Dahl’s specialty.

The story gets a huge boost from slacks-wearing Leoni whose weird Laurel is a wicked riff on Annie Hall. The San Francisco foreplay eventually leads to Frank getting back to Buffalo, where he has to deal with Irish mobster Ed O’Leary (Dennis Farina).

What the film world would do without alcoholics and AA is a mystery. Meantime give thanks for the existence of one Ben Kingsley.