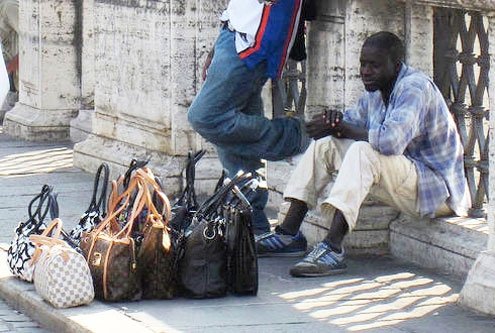 Most goods vendors in Rome are Senegalese, but many are referred to as Moroccans.
S

omething that’s always taken me back about Rome Italians is their complete lack of politically correctness. Most people in the U.S. work to avoid using words and phrases that might cause needless offense. Italians on the other hand seem to blurt out whatever’s on their mind, giving very little thought to the impact of what they’re saying.

This can be refreshing at times, admittedly. The downside of the American way is that we often think too much before speaking. Italians might even say we’re a bit phony.

Maybe we are, but we’re still polite.

A good example is the way many Romans still refer to street vendors. Whether the vendors are peddling umbrellas, bracelets, handbags or scarves — spend a little time in Italian cities and you’ll notice there is a difference between who sells what — they’re often generically called marocchini, Moroccans. There’s no mystery as to why: it’s based on their skin color and alien-ness.

Italian actually has a phrase for illegal or unauthorized street vendors, venditori ambulanti, which basically means traveling salesmen. But it’s a clunky to say aloud. And though Marrocchino is clearly derogatory, no one pays much attention since it’s been built into the language.

The same kind of insensitivity goes for the description of babysitters or caregivers. Italians have the bad habit of attaching racial slants to any kind of help-out job, since such work is seen only as menial. I remember a stretch when I was working so hard I had little time to clean up. The suggestion of an Italian friend? Ma perché non ti prendi una filippina? (“Why not hire a Filipino to help out.”)

A large Filipino community made its way to Italy in the 1960s and 70s, with most of them taking household jobs, basically the only ones they could get. Many married and started families in Italy. Since then, Filipino has become a going synonym for maid or helper.

Like most countries, the U.S. has its own share of racial and ethnic slurs, but they’re usually used in anger. In Italy, north or south, Filipino and Moroccan are part of day-to-day speech.

Live in Italy long enough and some of that language profiling rubs off. The other day my husband called me to ask me where I was. Sono al negozio dei cinesi, I blurted out, “at the Chinese shop.”

Chinese families in and around Rome run household item stores that literally sell everything but the kitchen sink (like Korean markets in New York). These shops have names, and in New York many locals actually learn the name of the owner, but in Rome everyone calls them I cinesi. It may be good-natured but it’s still discriminatory. I try catching myself, but bad habits die hard.

Another issue is weight. I’m neither fat nor thin, but whenever there’s a slight change in the pounds department I’m almost immediately called out. Ironically, the observation often happens immediately after a cordial greeting, as in:

“Hi, how are you? Long time no see! Looks like you’ve gained a few pounds, no?”

Great. Why don’t you tell me how you really feel?

It’s at moments like those that I envy Rome bluntness. I could return fire saying,

“Wow, so nice to see you again! It’s been so long! Turn around and let me get a good look at you. Yep. You’re still ugly.”

But I’m not there yet.