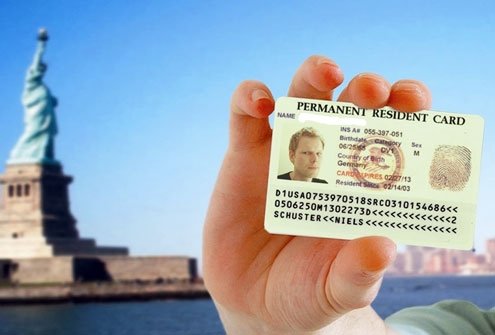 Romanticize the Green Card process at your own risk.
I

never had much use for online forums until I tried to get my non-American husband into my country of citizenship, the United States. The name of the most popular forum sounded melodramatic: Visa Journey.

A journey is a trip you take over a long period of time and over great distance. It tends to be open to improvisation and change. I never imagined getting a Green Card for my husband in the context of a lengthy, unsure process. I instead saw a series of clear steps the two of us would take, ticking off boxes along them way. Though I never assumed the process would be simple, I did think we’d always know where we stood and how much further we had to travel. I was also convinced all questions would be answered clearly and that, as a U.S. citizen, I’d be treated with respect.

But the distance I’ve traveled since has justified that site’s melodramatic name. It has been a journey. The way was unsure, and directions often laden with ambiguity. I endured peaks of emotional instability and valleys of exhaustion in years of hard work that sometimes enveloped me in hopelessness and made me think I had no choice but to quit. As with any good journey, when the final destination finally became visible, I shook with joy and cried, tears streamed from my eyes.

But unlike a good journey, from which you return fulfilled, this trip was an odyssey I can’t find a single flattering word to define. “Good riddance” comes to mind.

It began in earnest in 2005 (or maybe it began when I met my future husband Simon in a nightclub off Campo de Fiori). That year Simon and I were married in Oakland, California by a justice of the peace dressed in a Christmas-themed sweat suit made from black velour and decorated with green and golden trees and ruby-red presents. Immediately after, we filled out an I-130, the petition an American family member files requesting an adjustment in her new family member’s status from “alien” status to legal permanent resident. The petition was approved in late summer 2006, a hopeful sign, after which, in spring 2007, after 20 months in the U.S., we returned to Rome where Simon’s mother lived. Interrupting the process would prove to be a fateful choice. We knew we intended to make the move but we hadn’t decided when. For this start-stop action, Simon was slapped with a 10-year ban from entering the U.S. — which at the time seemed serious but not devastating.

Jump ahead to 2012. That year brought two major events: Simon’s father died of cancer and I decided I wanted to return to school in the U.S.

Knowing things had gone well in 2006, at least we stopped trying, I prepared my application, and was accepted. I then began working on getting Simon’s visa ball rolling again. But the ball moved more like a turtle. Petitions, applications and affidavit of support were the currency of the process. So was currency itself, in the form of fees. Making Simon eligible for immigrant visa, which if you’re approved leads to a Green Card, required an interview that took a year of haggling to schedule. Finally, in late April 2014, he was interviewed at the American Consulate in Naples.

If all went well, and U.S. authorities accepted Simon’s explanation of the eight-year-old interruption, I could start school in September and we could travel together to see my family in Michigan for the first time in eight years. But I had a bad feeling. Bureaucracy loves its bans.

Simon was turned down. The 10-year penalty hadn’t expired. I sent in my second and final university deferral.

Our only remaining option was to file what’s called a waiver of inadmissibility, a document usually reserved for felons and people who have entered the U.S. illegally. It required me to furnish a letter explaining my “extreme hardship,” or why I couldn’t live in the U.S. without Simon.

Being separated from the person you love (or your family) doesn’t qualify as extreme hardship. The U.S. government expects citizens who marry non-Americans to weave potential separation into their lives. The final version of my hardship letter ran 15 pages and was supported by 70 pages of documentation. It included letters from family members, references to financial concerns, and translations of Italian bills.

Apparently, my hardships were considered sufficiently valid. In September, Simon and I received permission to return to the U.S. united and legal. We leave in January 2015. The journey had taken nine years in all.

Bluntly, I learned that the American government seems to care little about its citizens. Many spouses of American citizens enter the country illegally only after enduring years of exasperation if not humiliation.

I also learned not to give up. Learning the value of persistence is edifying. When Simon and return to the U.S. together for the first time in nearly a decade, I know I’ll sob. Not for love of country, but because the journey, a miserable one, will have finally ended.