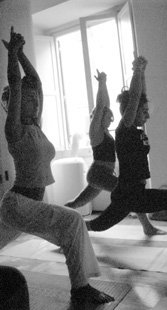 ntering Ego-Yoga in Rome I was certain what it wouldn’t be: New York. No way would I find the tough Power Yoga I’d come to love in the Big Apple. This would be rustic and tamer, maybe even a little backward. But midway through my trial class with Max Grossi I found myself in the “child’s pose,” a rest option where you curl over your knees and place your forehead on the ground. I associate the position with failure.

Moral of the story: Don’t mess with blue-eyed Max, an ex-bodybuilder who took up yoga when back problems limited his mobility. Grossi and Marika Moretti run Ego-Yoga, which opened in 2000 in a third floor apartment above bustling Via Cola di Rienzo.

At the end of a strenuous workout I felt the way I wanted to: tired but energized. Forget New York, Grossi knows what he’s doing. He directs, cajoles and adjusts the movements of everyone in the room.

It’s the brainchild of Mark Blanchard, an American who studied with India’s Sri K. Pattabhi Jois, the father of the modern Ashtanga movement, the most physically challenging version of yoga. It proposes many yoga asanas (positions), at the teacher’s discretion. Traditional Ashtanga follows an unvarying routing, which Grossi finds “alienating and fossilized.” The challenge of Power Yoga, he says, “lies in progressively improving one’s mastery of the various sequences.”

Breaking away from the “backwardness” of classical yoga,” he adds, means “educating people that [yoga] can also be a true and proper workout, which is more in line with what we as Westerners are conditioned to want due to our hectic, stressful lifestyles.”

Marika Moretti sees other advantages. “People in the Western world tend to feel good when they look in the mirror and also look good,” she says.

A Progressive Power Yoga class burns between 500 and 600 calories (mostly fat), in addition to working all the major muscle groups and improving balance and flexibility. Though it appeals to people who want to look good, Max and Marika quickly point out that physical aesthetics isn’t a goal of yoga, which has no goal except general well-being.

Grossi says Italians have only recently become fascinated with yoga. Celebrity involvement (he cites Madonna and J-Lo) has helped. To combat stress, Italians are also seeking something that comes from within, a benchmark of yoga.

But Grossi is smart enough to know that yoga must dispel enduring cultural prejudices and preconceptions to gain a real foothold. Working up a good sweat, he says, must replace the idea of yoga devotees as members of a sect gathered to light candles and chant.

One student, a 31-year-old business-woman named Ludovica, said she began Power Yoga to find relaxation techniques. Her businessman boyfriend, Giorgio, 37, a yoga novice, said he liked it because of its “tough physical effort that also works on the mind.” Flavia, a 32-year-old government bureaucrat, said she wanted something “different than the usual gym workout” and found it with Grossi.

“Anyone looking for a guru to follow won’t find one,” says Marika. The studio’s suggestive name, Ego-Yoga, plays on a hoped-for reconciliation of opposites: self-involvement working in concert with physical and meditative concentration.

The studio has a large foreign contingent, including many Americans and Britons; ages run from 20 to 60 with the female-male percentage ratio about 60-40. “Initially it was difficult to attract men,” says Marika. “They thought it was just a lot of meditation, but then they’d come in with their girlfriend or female friends and find out how hard Progressive Power classes were. They’d just light up, and eventually join.”

Grossi is the only Progressive Power Yoga teacher in Europe authorized by Mark Blanchard to certify fellow yoga teachers. The certification required 250 hours of rigorous training and still involves trips to Los Angeles to study with Blanchard. “Yoga is a life-long learning process,” says Grossi.

Where would Max and Marika like to take Ego-Yoga in the future? Opening other studios is an option, but they’ll wait for the demand that education brings. “There is a lack of yoga studio culture,” says Marika, “Classes are usually just offered in gyms and people are not willing to risk opening proper yoga centers yet.”

As for other disciplines (the popular Pilates, for example), Rossi is adamantly pro-yoga. “Yoga is a philosophy, whereas Pilates is a fitness workout,” and to associate them, he insists, would be “to dirty and commercialize a philosophy.”

A brief postcript: The day after my time at Ego-Yoga, I discovered Ètoile Sportif (Via della Farnesina, 91), a sports store with a yoga-friendly line. Owner Barbara Giachini has known Max Grossi for a decade, but is not a yoga practitioner (she says she needs something “very dynamic like running or step” to feel she’s getting a real workout). Still, Giachini offers high praise for her friend, “After Max there is nothing else.”