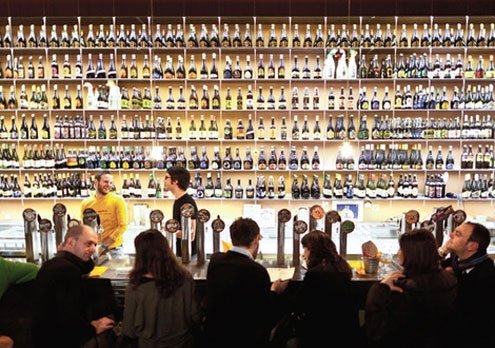 The bar at Open Baladin on Via degli Specchi.
T

he month of February — Super Bowl Sunday included — always conjures up a mental hologram of a tall, froth-topped glass of properly poured beer. While Italy has long been tied to its many food and wine riches, it actually produces and consumes its fair share of hops and lambics. The country’s best-crafted beer has northern roots — with Turin and the Piedmont long known as beer territory. At the same time, southern microbrewing has increased both in volume and quality over the last decade, with Rome gradually emerging as the country’s top artisanal beer drinking destination. Here’s my short list of my local favorites.

Ma Che Siete Venuti a Fa’ With more than 200 bottles and 15 draught beers from the U.S., Italy, Belgium, Germany and Denmark, this two-room pub with a short connecting corridor, terrible toilets, loud music and an off-putting name offers an impressive variety of ales and lambics, with well-loved labels including LoverBeer, Birrificio Montegioco, Spezial, Wild Beer Co., Siren Craft Brew, Cantillon and Extraomnes — all sold at value prices. The knowledgeable hosts welcome regular visits from the world’s top brewers and organizes frequent beer-centric events. The beer geeks who run this place — which roughly translates, “What the hell are you doing here?” — also own Bir & Fud across the street (see below). Open daily 11 p.m.-2 a.m. Via Benedetta, 25. Tel. +39 06.6456.2046.

Domus Birrae This great beer and bottle shop near the Coliseum offers beers from breweries including Extraomnes, Birra del Borgo, Toccalmatto, Stavio, Birrificio Montegioco and Birra Turan. It also imports from UK and U.S. breweries like Hoppin’ Frog, Crooked Stave and Lost Abbey. There’s a home brewer’s corner with all matter of ingredients and gear to make your own beer, and an expert steps in three times a week to offer hands-on tutorials and advice. The shop is spacious, with breweriana on the walls and a barrel near the main entrance with bottles cracked open for sampling. A back room is chock with hundreds of beers divided by region. The patient gentleman behind the counter pours draughts at perfect temperature and can share food recommendations on beers to take home. And speaks English. Open Mon.-Sat. 10:30 a.m.-1:30 p.m.-3:30 p.m.-9 p.m. Via Cavour, 88. Tel. +39 06.9799.7570.

Brasserie 4:20 The management of this Porta Portese brewpub specializes in rare beers, marketing its own Revelation Cat label as well as unique craft microbrews, a few guest international cask ales, and draught beers from 30 taps (not to mention a house liquor). Built into an old railway industrial structure with internal brick barrel vaulting, the Brasserie features a downstairs main room with a metallic look and an a more sheltered upstairs bar (with a more limited range of beers). Beer is the main ingredient in most of the food and mason jars are used for almost all pours — cute enough, though purists might suggest that’s no way to present good beer. The staff is trained and patient with beer novices. Open daily 7 p.m.-2 am. Via Portuense, 82. Tel. +39 06.5831.0737.

Birra+ Pigneto’s upbeat vibe and hypsterish restaurants find a worthy foil in this neighborhood punk beer bar. Birra+ is where locals come to get their beer dorkery on, with no room for novices. The taps are limited (eight), but you get high quality options (hoppy American, European brews, and a few sour ales). A bottle shop lets you buy beers to drink on the premise or for take-out. Given the sparse seating, the latter may be the best option. Open daily 4:30 p.m. to midnight. Via del Pigneto, 105. Tel. +39.06.7061.3106.

Blind Pig This Chicago-like Appio speakeasy offers a good selection of rotating craft beers from small European and U.S. producers. Off the beaten track, this unpretentious place is laid back, with tables made from old liquor crates and walls covered with beer bottles. Dishes and good burgers are named after Prohibition-era gangsters. On Monday, Blind Pig serves a heaped plate of vegetarian grub and a beer for €5. Open daily between 6:30 p.m.-2 a.m. Via Gino Capponi, 45. Tel. +39.3281.61195.