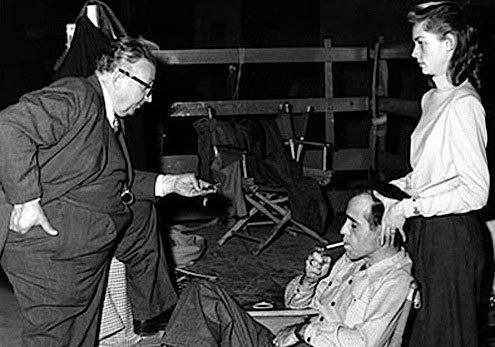 Get Lauren Bacall within a slow-burn Camel of Humphrey Bogart and she morphs into pure pheromone.
L

anguage is in flux. Dogs are transformed from man’s best friend into the favorite idiom of adolecent boys in heat. “Yo dog, over here.” Brothers, last seen in arms, are now Slavic grunts. “Chill bro.” Birds, once girls in a male aviary, are passé tense. No such thing as a hot bird.

Half-a-Nazi salute — in case you missed it — is the hand, as in, “Not listening.” Would that Hitler had been so cool.

4 sure, shah, language is in flux.

Rummaging for bearings in bitchin’ ’05 is totally hard. Trust me, bro.

In Prague, a science fiction addict with short blonde hair dragged me to a new-print screening of “Star Wars” (she called it Star Warts). Czech, she said, was the official language of outer space. Good to know. Harrison Ford spoke Czech. Grunting Chewbacca and Darth Vader (Bohemian, if not Draconian) towed the same line. My sci-fi girl sounded more like Slobodan Milosevic munching on consonants, though my failure to understand “no” might have played a role. Debbie Does Dallas is another Czech-language hit; we never went.

Language is in flux, and I’m a hot mammal, or a cool one. My amps are haughty or haggard. We’re only 40 years on the wrong side of “A wop-bop-a-loo-lop, be my baby” (no, he doesn’t mean maybe) and I’m already archaic.

Fast forward to a Rome restaurant where I theorize to a flame-haired dinner companion that Mikhail Gorbachev might well have appeared in Casablanca. Check out Sam’s bar.

Then there’s Key Largo. Get Lauren Bacall within a slow-burn Camel of Humphrey Bogart and she morphs into pure pheromone. They could put her a vial. They could…

“Overshare,” says my companion, as if she’d pressed hard on a quiz-show button.

Prevarication comes to mind. Red hair does that, usually sumptuously.

Maybe she’s a broker surreptitiously tied to the NASDAQ. Too much trading and you lash out. That’s worth a half-second sulk. Or maybe “overshare” is a component in a new perfume that lures users into believing they’re in a 1940s noir: “Overshare — The Fragrance That Shares Everything,” and maybe she’s wearing it.

Sarcasm, you gotta believe, is delicious when you own the dosage. Otherwise it’s not cool but brittle.

Too much information, she says, doesn’t suit her dinner needs. Chill is what I need to do to my outlook, not the wine. Whimsy is old.

Intense mammals scare the prey, at least in 2005. Wit springs bad traps; who needs hieroglyphs; who wants eloquence? My sentences — Triumphs in an age of Humvees — are speeders with their high-beams on. They deflate the deer. But how to ignore the only vocabulary in your shallow pockets?

And how, I beg to know, am I sharing too much?

“Look,” she gropes, “get speechless or chill. It’s not as if I want to do it with you.”

“Cancer guys are get amped up; this isn’t a good idea.”

Which puts me right back with Czech-speaking Han Solo. Lauren Bacall is nowhere in sight.

Leave it to my companion to up the ante.

“Who is Lauren Bacon?”

Does she know who Bogart is?

“But did they name it that way because he was gay?”

Because of Bogart and Bacall?

“I so totally sure I’m not sure I want to be here right now,” she says.

Why, she wants to know, are dates so complicated? And why are men so obtuse, intense, eager to psychoanalyze? What’s this about “phermones”? What am I, her therapist?

Language is in flux. In front of your eyes, bro. And there she is, Lauren Bacon, walking the dog, or you.