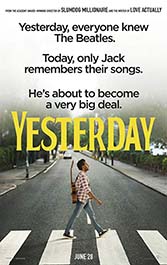 In 1969, man landed on the moon and The Beatles released the album “Abbey Road,” which ignored the moon in favor of “Here Comes the Sun.” For Beatles fans that order of importance is incorrect – they could have done without Apollo 11, but not the boys from Liverpool.

Director Danny Boyle, a British child of that musical generation (nine when the song “Yesterday” was released in 1965), makes it clear where his priorities lie in “Yesterday,” a sweet little story about a wannabe singer-songwriter, Jack Malik, (Himesh Patel) who just so happens to remember The Beatles. ‘Just so happens’ because Boyle’s human race was hit with a cosmic hiccup that obliterated the Fab Four from music history, at least in Jack’s version of the universe.

Nice conceit, but what to do with it? As it turns out, Boyle can do only so much, since his underlying aim is to tap into musical nostalgia, very much a genre of its own.

While our boy may remember some of The Beatles, he’s short on lyrics and composition skills, at least for starters. But once he puts together enough, he’s off and running – pushed by an ambitious manager (Kate McKinnon) eager to make him into a 21st-centry product.

Unfortunately, though, this is intended as a romantic comedy (written by “Love, Actually” director Richard Curtis), meaning of course that Jack will chafe against his success, pine for greater artistic freedom, and (of course) realize that while his high octane manager may know the business, his heart’s business lies with true love Ellie (Lilly James). At this point, the story turns to mush, which not even Malik’s earnestness can redeem.

Still, what matters here is audience voyeurism, tapping into the beginning of The Beatles in a way that bypasses their early 1960s Liverpool roots. The thrill is the soundtrack as much as in the movie, which is cute and competent at best.

Part of Boyle’s problem is taking on The Beatles, a group and an “event” so much larger than life that trying to pay homage to them half-a-century later can seem trite, especially since Boyle can’t use the real songs. You do come away from this knowing that if veteran director Boyle (alt movies, sci-fi, and biopics) and fellow veteran Curtis — both nine when the song “Yesterday” was released in 1965 —had to choose between the momentous lunar landing and the thrill of Abbey Road, it wouldn’t even be close.