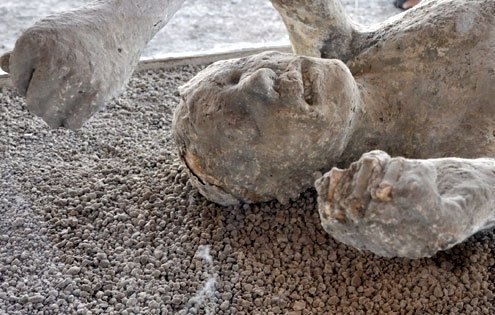 he figure in front of me clawed at the air, his inability to breathe drawing back his lips in a snarl of fear, of disbelief, of rebellion against the one sure thing. His teeth bared, perfect and small. The bones of his feet protruded.

Even as I raised my camera, dutifully documenting what hundreds of thousands of others had before me, I shuddered.

It was my (long-overdue) first trip to Pompeii. As a child, I’d read an article in National Geographic magazine on the Vesuvian eruption and dreamed of one day traveling to the Roman city where so many doomed residents had once flourished and of seeing the infamous plaster casts that covered many of the sprawled and terrified victims.

Now, visiting as an adult, I was fascinated. But I was also disturbed.

Whether in Pompeii or elsewhere in Italy, ancient history always seems to impart a central lesson: That these people were just like us. Smaller, sure. With shorter life spans (though not always), yes. In a different cultural, social and political environment, of course.

At the same time, most human needs and desires and foibles haven’t changed. More surprisingly, though, nor have many of details of daily life.

It’s a theme that’s hit me often in Rome. Long before I struggled to find affordable and feasible housing in the city center, Romans were building six- and seven-story buildings to maximize space. Long before I griped about garbage truck noise (the truck arrives every night at 11:45 p.m., the only thing in Italy that is prompt) or the cries and laughter of pub-crawl revelers down the street, Romans were bemoaning the city’s incessant noise.

And long before I learned to be on my guard in accepting the compliments of Italian men, Ovid was writing about how to meet women in public areas, recommending the art of the compliment (“in scarlet, swear she looks in scarlet best”) and inviting persistence (“by slow degrees we bend the stubborn bough”).

Graffiti, garbage in the street, women leaning out of their upper-level balconies to chat across buildings, weight-lifting, sundials, speaker’s corners, even the women waiting on Monti street corners for new nighttime (or daytime) customers: None of it is new.

Frozen in time by ash and forgetfulness, Pompeii serves as a particularly physical reminder of just how not far we’ve come. There’s the political campaign ad written in red on the wall of a shop in the town center that sings the praises of one candidate (and how even the shop’s prettiest female worker supports him!), the wine bars with their marble counters and stone shelves for holding various bottles, the public fountains, the scrawled writings saying simply that so-and-so was here.

You can find such these reminders in other ancient sites such as Ostia Antica. But there’s a darker undertone here. Life simply stopped.

Why is one part of the street is flatter and easier to walk on than the other? The people of Pompeii were at work repaving the road to make it safer and more accessible; they simply hadn’t finished.

What about the little dots on the floor of a wealthy man’s home that seem like a constellation of pinpoints lodged in concrete? The owner was apparently replacing one mosaic with a newer one when the eruption struck.

And the graffiti on the house that says “Sodom Gomorrah”? It was very likely dashed off by a Jewish resident fleeing the city to draw a parallel between the day’s apocalypse and the punishment received by an earlier, immoral city.

Even as city inhabitants went about their home remodeling and street repaving, their political campaigning and bar-hopping, their sleeping, eating, working, and romancing, Mount Vesuvius lay in the background, violet and green, serene and silent. No one even knew that it was a volcano.

Until, of course, they did.

As I examined the plaster-cast death throes of Pompeii’s woebegone residents, it was similarity that reached out to me. The unending uncertainty of life. The never-knowing of what lies ahead. It reminded me of an inscription in the Capuchin crypt, one of Rome’s spookiest spots, where the bones of past monks adorn chambers in elaborate swirls and where some of their decomposed bodies still lay or stand, a few still dressed in life’s itchy wool garments. Below one set of remains reads the inscription, “What you are now, I was once. What I am now, you will be.”

It’s a macabre reminder. But also a reminder to enjoy each passing day — and avoid getting too caught up in the late-night noise of a Roman street, or the frustrations of reflooring a room.