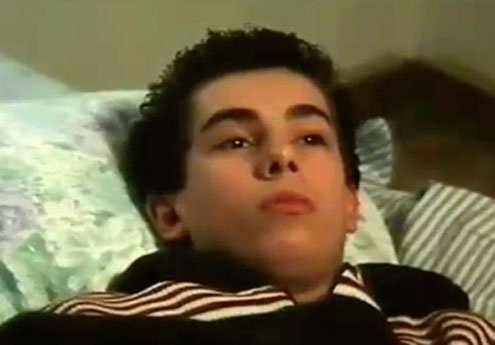 Andrea Corneti's one film role was a winner in "A domani."
R

ecent American indie gems, including “Little Miss Sunshine,” “The Perks of Being a Wallflower” and “Beasts of the Southern Wild” have made film festivals such as Sundance a main event. Italian indies, at least those that deserve the label — low budget but tightly focused — are a rarer species. Low-end, 21st-century Italian filmmaking seems mostly to come in documentary form, with the exaggerated woes of the country front and center. Intelligent stories free of political proselytizing are rare. But they’re out there.

For starters, try going back 15 years, to 1999, when writer-director Gianni Zanassi, then in his early 30s, managed to concoct “A domani,” a smart and tender gem soon lost to the oblivion that absorbs good but under-promoted and non-celebrity films.

The Modena-born Zanassi made three features between 1995 and 1999 and another, “Non pensarci,” in 2007. None met with much success and he eventually turned his attention to writing for television. What distinguishes “A domani” from the rest of his limited work is its autobiographical feel, as if Zanassi wasn’t so much writing and making a movie but staking a claim to an adolescent memory he couldn’t shake unless he used his mind’s eye to print it.

Fifteen-year-old Andrea (Andrea Corneti) and his older sister Stefania (Stefania Rivi) live in the Bologna suburbs where they bicker with each another and their middle class parents. Gentle windbreaker-wearing Andrea dreams of zooming around in a Ferrari, which for him is dreaming big (Ferrari’s home base is just outside Modena). When Stefania tells him she intends to “elope” to Bologna for the weekend with her boyfriend, Andrea boasts that he has a girlfriend and wants to bring her along. It makes sense since the destination is the Bologna Motor Show, an annual event. Andrea’s girlfriend doesn’t show up of course, but eager Andrea tags along anyway.

Zanassi’s coming-of-age story follows Andrea’s passage into a Bologna dream world: he strolls among the cars making friends; he’s important; he drives go-karts; he’s a 15-year-old someone. Since North American teens often tote automatic weapons or grow vampire fangs, Andrea is a rare release. He’s an actual boy-man. All the big things in life he has to dream up, and when real life smacks him, his responses are his to make up, all the more so when he’s separated from Stefania.

When Andrea and Stefania finally meet up again, it’s big sister who’s in tears and little brother who consoles her. Little does she know what fun he’s had, which is his to have and to hold.

As it turns out, this was Corneti’s only film, but his wide eyes and pensive nodding are worth 90 minutes and Giuliano Tavani provides a superb soundtrack.

Speaking of soundtracks (now an obliterating presence in both TV and film), all hail John Barry, who before John Williams seemed to “get” the pace of what he was scoring, particularly in the 1960s, when the spy genre was king.

If Sean Connery’s James Bond was that decade’s spy-as-sex object, then Michael Caine’s Harry Palmer turned the tables as a disheveled Cockney intelligence agent. A fiercely ironic creation of prolific novelist Len Deighton, he was the perfect Home Office anti-hero, Bond’s sour and jazz-fueled underside; he’s a loser until he’s not.

Canadian Sidney J. Furie’s 1965 “The Ipcress File” rightly made Caine (born Maurice Micklewhite) into a hot commodity. Given a choice, Caine’s Palmer probably wouldn’t even go to work, preferring girls, booze and hangovers. But intrigue suddenly comes after him.

Furie takes the mystique out of the spy game — it’s a bureaucratic nightmare — but Palmer is eventually pushed into a case involving the brainwashing of British scientists. The story gets sillier, and portentous, as it goes along, but Caine stays true to form. In fact, Daniel Craig’s vulnerable, 21st-century interpretation of Bond owes a debt to Deighton’s Palmer and Caine’s residence in the role.

Add Barry’s haunting score — call it jazz club noir — and you have something of a transition film, between the white hats-black hats era of the postwar era and the soon-to-arrive grey zones of the Vietnam, Watergate, and the 1970s.