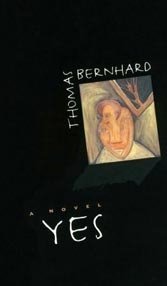 By Thomas Bernhard, translated from the German by Ewald Osers

“Ja” is a remarkable car wreck, metaphorical in full, but the kind Dutch-born Austrian Bernhard (1931-1989) lived to construct: a depressive, panic-attack ridden scientist, a virtual shut-in in his rural Austrian home (“my existential prison”), made to collide with the taciturn companion of a vain Swiss engineer who’s decided to build estate nearby. The scientists knows only a world of gloom broken from time to time by Schopenhauer and Schubert; the woman is a Persian, long-time miserable second fiddle to her gross, power-plant building companion.

When dour scientist and lost woman walk, little is said, until his misery brings forth hers and the scientist is briefly given pulse, life, and concern outside himself. No 20th-century writer had so lucid a command of despair’s membranes as Bernhard, for whom low is a kind of high, a ladder if not toward omniscience then at least toward a keener understanding of the stammer that is being. He gives voice to “shipwrecked persons” who otherwise believe, “Everything about everybody is nothing but a diversion from death,” a thought best articulated by Canadian cultural anthropologist Ernest Becker.

Bernhard’s characters “have to exist,” for no other reason than lug depression around like some sterling burden. The Persian woman of the story is being “discarded,” moved to a cold valley by a man who now exists to spite her. But her fierce grief is the narrator’s mirror and fuel — “Was this not my condition, which the Persian woman … was enacting for me?” This slender volume represents yet another of Bernhard’s ode to the ironic caprices of the human condition, in which “lost and ruinous” people, its walking dead, exist to elucidate, often beautifully, that which will be the death of them.