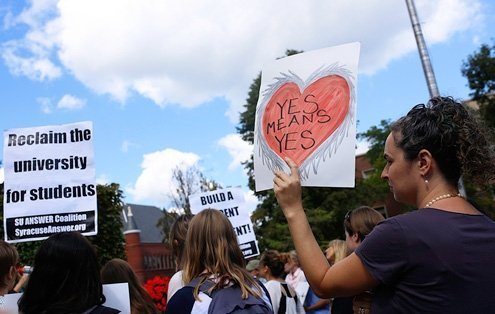 A pro- yes means yes" protest at Syracuse University in 2014: the law they are a-changin'.
E

ver kiss your partner without getting verbal permission first? Even if he or she kisses you back, if you don’t ask your partner and your partner doesn’t say “yes,” under some recent U.S. university policies and proposed criminal laws, you will have committed sexual assault. This is the new “yes means yes” standard in America, replacing “no means no.”

Neither “yes means yes” nor “no means no” make an appearance in Italian university policies. Prompted by the European Union, some universities have adopted procedures for dealing with sexual harassment. But there is only a minor reference to the criminal act of “sexual violence.”

The U.S. drive to replace existing sexual assault definitions with ones more friendly to “victims” and “survivors” — no longer just “accusers” or “reporting persons” — is also eroding traditional American due process rights: the right to confront the accused, to have all evidence presented, and to a lawyer.

The traditional U.S. standard of guilt calls for proving that guilt “beyond a reasonable doubt.” The new legal standard as proposed (and in many cases already adopted) depends instead on the “preponderance of the evidence.” In other words, if the available evidence is 51-49 percent in the accuser’s favor, then the accused is guilty.

Critics of the new standard fear a “he said/she said” situation, in which believing one side just a bit more than the other will result in life-changing sanctions. Before the “preponderance of the evidence” standard, the Columbia University committee reviewing Emma Sulkowicz’s case apparently didn’t believe it could judge sufficiently between what “he said” and what “she said” happened concerning details of her alleged rape. Sulkowicz is the “mattress woman” who was the subject of June’s column.

In Italy, the standard for sexual assault convictions remains “beyond a reasonable doubt,” with strong protections for the defendant — a standard the U.S. adhered to for decades.

On the criminal law side, the influential American Law Institute (ALI) has drafted a model penal code proposing wide-reaching changes in sexual assault law that would criminalize behavior many now see as “normal,” and would dramatically increase prison terms for those convicted of sexual assault crimes. A similar approach can be seen in Italy’s “feminicide” law, which treats the personal relationship (relazione affettiva) between the victim and her assailant as an aggravating factor in assault and even murder cases.

In the U.S., most criminal law is state law, and therefore the changes come state by state. The ALI’s model law, once adopted by a vote of the ALI membership, will influence states to adopt these new standards.

In 2014, Georgetown law professor David Cole, writing in the New York Times, noted that the U.S, was “indisputably the world leader in locking up human beings behind bars.” More than two million people are incarcerated, with seven million supervised in the criminal justice system. The U.S. has five percent of the world’s population and 25 percent of the world’s prisoners. According to The Sentencing Project advocacy group, it is first in the world in terms of the number of those imprisoned, and first among industrialized countries in its incarceration rate.

Yet the ALI’s proposed changes would likely result in even more incarceration for even more acts.

Actions were included in the definition of consent, which in the kissing scenario meant you could kiss her back without first asking permission. But the law applies only to New York campuses.

There’s no question that the matter of sexual assault on American college campuses needs to be addressed. Campus rules badly need changing. But the overreach and overreaction have shocked many Americans with a strong sense of civil rights.

Many U.S. women’s organizations support these stronger policies and criminal laws on the grounds that past biases against women reporting rape on university campuses has resulted in perpetrators going unpunished — witness Sulkowicz’s claims.

Supporters of the new standards insist that weakened rights for defendants are the price one must pay for protecting women. So far, Italy and other EU states have resisted such a weakening, a weakening I never imagined I’d see getting its start in the United States.

— Dianne Bennett, the former managing partner of Hodgson Russ LLP, is a member of the American Law Institute and has been a politically active feminist for decades. She and her husband have written two alternative guidebooks to Rome. Christine Marciasini of Studio Pirolo Pennuto Zei & Associati researched the Italian law for this article. Don Carroll returns in September.