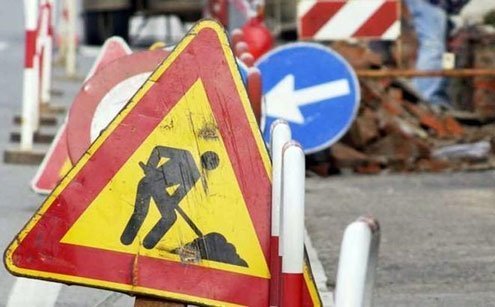 Streets closed at rush hour often for weeks at a time.
H

uman trends generally come in three sizes, amusing, exasperating and telling. National ones follow similar logic. Italy is the rule that voids all exceptions, since trends are not part of life but life itself.

At dinner at a local pizzeria, a man in his thirties sits down with his seven-to-10 year old son. They prattle on about pizza and soccer until the boy gets antsy.

“Yackson,” says the father, testily, and the boy looks up.

This is an Italian child named Jackson. No, his mother isn’t American, since she arrives soon thereafter. She speaks rapid-fire Italian, sets down her shopping bag, and says, “Amore mio Yackson!”

America and American given names have long been trendy, and my neighborhood is in the vanguard of all things English language, including lessons, tennis academies, and health spas. In Rome, expensive foreign schools once designed for expats now harbor an inordinate number of Italian kids.

Meet Ryan. He’s about nine. He comes equipped with iPhone and other luminous gadgets. Ryan and Jackson (REEan and Yackson) immediately burrow into chatter about video games and spy missions, while their parents exchange pleasantries — though Yackson’s father can’t get enough of his son’s name. “Yackson, che fai?” “Yackson, stai calmo.” Soon, all around are paying attention to the Anglo-Italo wonder boys.

Mother of REEan is angry. She was stuck at the intersection for 20 minutes, she says, before even being able to make a turn and hunt for a parking spot. “They’re all crazy,” she says of the drivers, “and there’s the work…”

The “work” would be construction in the middle of my street, a narrow but vital, four-lane artery that leads to the southern edges of town and is a conduit for tens of thousands of vehicles daily. Last month, the City of Rome, as part of its “Rome Works for You” program, began laying new fiber optic cables under roadways. Since “for you” began on my street, traffic — with the lanes reduced from four to two — has backed up for miles each rush hour. In general, work begins at 8 a.m. and ends at 4 p.m. No one thought to work from Midnight-to-5; it’s not allowed by unions and falls outside the Italian trend grid — even in Matteo Renzi’s new and invigorated version of trains-on-time Italy.

Worse than construction backlogs created by work undertaken at the wrong time of the day, and which takes too long to complete, is box-blocking. Seeing the light about to turn red at a crucial and crowded intersection, most Rome drivers (often on the phone) will nonetheless plow into the middle, staking their claim to an additional car-length, even if all else comes to a halt as a result.

No, it’s not a new phenomenon. Yes, Rome traffic is its own best — and most durable — cliché. Then again, this is the Italy Renzi wants to change and insists will change. The reason intersections are blocked isn’t fate, or even irresponsibility, it’s the lack of a prevailing notion of original responsibility (or of original sin, if you need an Easter blessing), the implied sense of responsibility that precedes the taking action and might be said to fall under the category of logic, even decency, and civic respectfulness.

Those who don’t know it can’t respond to it. They’re ignorant of the standard to which they’re being held, and blocked boxes common to North Africa, the Balkan world, and much of Eastern Europe. Where, then, does that put Renzi’s brave new Italy? The answer is not far from Mussolini’s streamlined 1920s version, partly imagined, mostly cruel, and entirely short-lived.

Maybe Rome’s strangulating brand of laissez faire will peter out in the coming years, jolted by out-of-the-blue civics. Maybe workers will take to night shifts and self-serving drivers think twice before snarling their own lives and those of others. But that’s in the hands of born-and-bred Rome boys like Jackson and REEan. Though before they reach the age of reason (and traffic) their parents may flee to Vail.