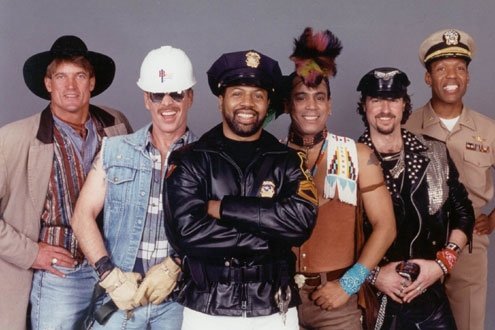 The Village People in 1978: Giving gays a chance to dance.
A

nother July weekend, another family wedding. We put on ties, load Alberto’s mother in the car, turn on the navigator, and head to the church. An hour later, the service is over. We wait on the steps as the newly-married couple emerges from the church. We throw rice, collect my mother-in-law, flick on the navigator, and head off to the reception at a tourist inn in the country. There are lots of friends and family. People sit where they want to, the food is on time and good, and the speeches are short.

As the staff clears the plates, the music starts, “Lady in Red,” by Chris DeBurgh. Though I once went to a wedding where the bride wore black — it was a 1990s thing —I’ve never been to a wedding where the bride actually wore red. Yet that annoying song won’t go away. The DJ plays something less morose and a semi-drunk guy gets up and performs a goofy dance routine. People laugh and clap. The DJ then plays the Village People’s “Y.M.C.A.” Guests of all ages spring from their seats and form a large circle. My husband Alberto has already been taken hostage on the dance floor. I try to hide but am captured by an overly enthusiastic sister-in-law.

I wonder to myself why this song has become a standard at all modern weddings, replacing the time-honored Bird Dance. Most Italians, gay or straight, have no idea what the lyrics mean. For them its just another silly group dance like the enormous 1963, Italian hit song by Edoardo Vianello, “I Watussi,” with its accompanying Hully Gully dance steps (which has been criticized for its racial insensitivity.)

Most gay people are uneasy with the stereotypical buffoonery of the Village People. Their disco rhythms were little too high school marching band for most gay tastes. The part where everyone joins in and follows along may have also put them off. For most gays, the happy crowd at high school and university dances was made up of boys and girls who paired off and continued to dance and romance after “Y.M.C.A” was over. The gay kids and the ignored heteros would wander back to their corners and watch. Three minutes of inclusion wasn’t enough to offset a lifetime of outsider status.

Many people still assume “Y.M.C.A.” is a “gay anthem” — “I felt no man cared if I were alive. I felt the whole world was so tight …” — and that the Village People are gay icons. That’s never been the case in any gay circle I’ve known.

The insert to the CD “Best of the Village People” explains that the group was formed to appeal to “eclectic residents” who went to Greenwich Village discos during the 1970s. The YMCA organization threatened to sue the band over concerns about the song’s double entendres. Victor Willis, the lead singer/writer/cop, went so far as to insist he wasn’t gay and that the song had no gay overtones. He insisted it was inspired by the local YMCA where many young men gathered and played sports. It soon became popular at baseball games and the hand signals were added during a guest appearance by The Village People on Dick Clark’s American Bandstand.

Music and its contribution to social change can often seem ambiguous and ironic in hindsight. As early as 1911, Al Jolson resisted racial discrimination and promoted equality on Broadway. He supported many black performers, playwrights, and songwriters, including Cab Calloway, Louis Armstrong and Duke Ellington. Black songwriter Nobel Sissle said that Jolson “helped prepare the way for others who would bring a more realistic and sympathetic touch to black musical traditions.” All the same, I wonder how many African-Americans nowadays are comfortable watching Al Jolson sing and dance in blackface.

During the era of American slavery, some historians say Africans used messages embedded in songs and sewn into quilt designs to tell others how to find their way to Underground Railway safe houses and freedom. However it was done, Africans obviously had an ingenious method of communicating to those who needed to know, while hiding in plain view from those who could not know.

Almost two centuries later, countless gay kids from all parts of rural America — runaways, throwaways, and misfits — escaped to New York or San Francisco, the east and west terminals of their underground railroad. Arriving with no place to stay, no money, no friends and no idea what to do, it not hard to imagine that many turned tricks on the street and got hooked on drugs and booze. Who knows how many died or were murdered. In many cases neither their families nor police cared to find out.

Until recently, the common practice in most gay clubs was to dance in circles with a woman in the center. If she sat down, the dancing stopped. Police routinely arrested and beat men who were found dancing together, fining owners of the bars or closing them all together, usually based on the violation of some archaic moral ordinance or contorted interpretation of liquor licenses.

Growing up in a small and rural Canadian village during the 1970s, I had no information about being gay. The Village People, dressed up like the clowns that everyone believed homosexuals were, sent out a thinly encoded radio message in a pop song. Their message said that there is a place you can go where other people like you exist and you’ll be safe. By the 1980s, the situation had improved and my underground railroad eventually lead me to a bar called Chaps just off Church Street in Toronto.

In today’s Italy, gays now have plenty of bars and dance clubs. But there’s a catch. Most are still under the umbrella of the Arcigay association, which means registration and membership fees. Arcigay clubs are considered more or less private so they can sidestep the problem posed by police and local authorities.

The Internet has helped young gay people know that they’re not alone. So have gay youth support and groups. But neither resolve the ongoing problem of isolation, abuse and neglect.

I’m on the dance floor at the wedding party. I do a two-step to the beat and form the letters of the song with my arms over my head in unison with the heterosexual circle. Everyone’s laughing and having fun. I do my best to paint on a smile. I think to myself that while “Y.M.C.A.” may have been just marketing scheme concocted by musical opportunists looking to cash in on “eclectic” trends, it may have rescued more lives than any pop song ever produced.