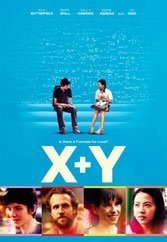 After a family tragedy, autistic young math prodigy Nathan (Asa Butterfield) struggles to relate both to his peers and his mother Julie (Sally Hawkins). Julie responds by finding him a supportive tutor named Mr. Humphreys (Rafe Spall). But Humphreys, who once competed in the International Mathematics Olympiad (IMO), has his own burden: multiple sclerosis.

Humphreys is determined to coax Nathan out of his private world and into a math Olympian. Together, tutor and student travel to Taiwan, where Nathan is tested by the complex social interactions necessary to deal with his fellow British math whizzes and their Chinese counterparts. Suddenly, Nathan is a small fish in a big pond. First comes culture shock. Things grow even more complicated when he starts developing unfamiliar feelings for his Chinese training partner. To Nathan, math is very logical. Love is another story. He wants to solve its formula.

All in all, this is a clever and assured debut made possible by Matthew’s acclaimed 2007 documentary “Beautiful Young Minds” that followed the selection and training of the British team that competed at the 2006 IMO held in Slovenia. Titled “A Brilliant Young Mind” for U.S. release.