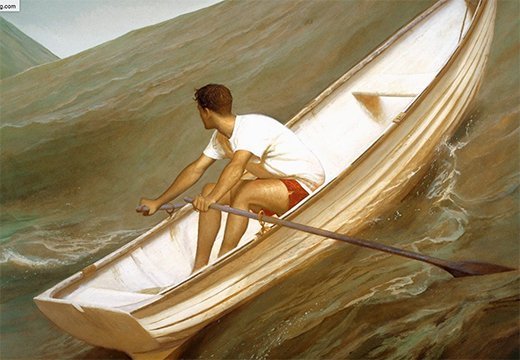 What happens when the lifeboats stop working?
S

he said I should forget it. All of it. Everything she’d just said.

I didn’t know where to start forgetting. She’d said a lot.

We hadn’t spoken in years. My life had remained largely static, become repetitive, unsettled only by the onset of disease, my vision in ruins. Hers had been far more varied. She’d graduated, worked a decade in public relations, but had decided to change careers. So she enrolled in law school. Applause, I had said aloud.

But she refused them.

Her life was a mess. She didn’t feel like living. She was permanently depressed. She’d taken a leave of absence.

This was part of what she wanted me to forget.

When she thought about life in the long run, it seemed to have no meaning, she’d said. Marriage, children, a law practice: all these were holding patterns ahead of aging – she could already see the wrinkles – and the decay that followed.

Find a purpose in it all, I’d said. Find it and stick to it, even if it’s an invention. Existence depends on illusions and hope in an imagined progress.

Progress toward what? she’d replied. She had friends her age who spent whole days posting to Instagram or to Facebook. Personal shots. Travel shots. Pet shots. Baby shots. Progress, she said, was illusory. We ran in place until our joints broke down, or our minds.

She had younger friends on Tinder and other dating apps. Most were glad, sad, half-desperate, with nothing in between, at times made manic or frozen by choice itself.

She had friends, many more than I’d ever had. She knew this. Two out of three are depressed, she’d said. Therapist in one pocket, antidepressants in another, smartphone buddies in between. Behold life’s riches. She had younger friends on Tinder and other dating apps. Most were glad, sad, half-desperate, with nothing in between, at times made manic or frozen by choice itself. None of her friends had found app love because no one knew what they wanted, or needed, or for how long, let alone she. Who’d be swiping left or right at 60, she asked, when all the youthful tinder ran out, pun intended.

You’re lucky, she told me. You come from that “other” generation, when expectations were drilled in early and you didn’t really have time to be anxious, at least not all the time. You didn’t succumb to worry as easily as we do. Life changed course more slowly, or so she imagined.

Don’t fool yourself, I’d answered. Many of mine were anxious. They just knew to hide it socially. They didn’t want the judgment. Now, there was perhaps less escaping such judgment, at least if you chose to play in the cyber-social sandbox.

I see myself as a high-priced corporate lawyer, she said, and think to myself, “so what?” I’ll still be worried it’ll all come unraveled. I’m so anxious I can’t function. I hate myself. Then I get distracted by something, maybe someone’s dog. Then I hate myself again.

See someone, I suggested, though I didn’t sound persuasive.

See someone who’ll tell me I need years of therapy because I had a lousy father but in the meantime load me up with pills? No thanks.

You can’t hide under the bed forever, I continued.

Who says? she replied. You’d be surprise how immense the bed is these days and just how many people hide under it, like the homeless under bridges.

Would being homeless make you happy?

Happy? As in life, liberty and the pursuit of? As in smiley faces? Happiness to me is when someone takes me seriously when I say I’m incurably sad.

So I should say I’m glad your sad?

No, you should say nothing at all. Because a chat like this isn’t worth it, and I’m not worth it, and you’d be surprised how many people who send you emojis feel the same way. They spend lots of time toting their own losses without even knowing why.

How long will you take off school? Do you even know?

No idea. Talk to my therapist, or my neurologist, or even my mother – good luck with that. I’m not qualified to talk about myself.

This version of you is not the person I knew. It spits in that person’s face.

I know. Welcome to being 30 in the 21st century. You can hate yourself and be right in the middle of the madding crowd. You’re your own population of one and that’s all you think about, the future of the species as you.

Next you’ll be making a legal argument for human extinction.

I already do, she said, but from under the bed. But forget it. Everything I just said.

But I couldn’t, and didn’t, because who can believe in safe passage when lifeboats don’t work?