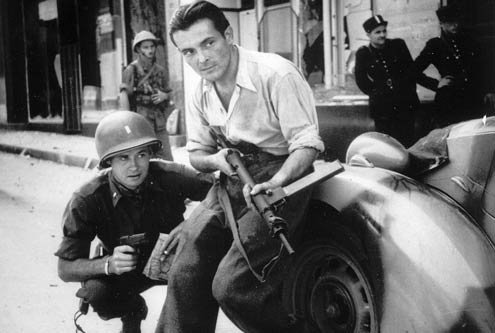 In the real World War II, an American officer and a French Resistance fighter in a street battle with German occupation forces in August 1944 in an AP shot.
W

orld War II is dead, long live WWII. An English-language culture dependent on abbreviations and infatuated with the insider quivering of acronyms has done the unthinkable: It has gulped away a war.

I often receive articles, essays and messages from an array of smart and gifted people. Most, it seems, have succumbed to foreshortening, apparently teased to life by the vulgar transformation of weapons of mass destruction into WMDs. So it is that World War II, which lasted between 1939 and 1945 and killed nearly three percent of the world’s population, 60 million, is now tiny little WWII.

There are “pre-WWII” events and “post-WWII poets.” For example, a friend tells me his grandmother was born “way before WWII.” Someone else alertly suggests “WWI and WWII were probably very different.” They were.

WWI, still World War I to me, brought million-dead battles and mustard gas to a world that considered itself post-barbaric — the first of many mistaken “post” notions. For the record, it lasted between August 1914 and 1918, with the United States entering in 1917. General John J. “Black Jack” Pershing and the Doughboys of his American Expeditionary Force (an early military euphemism) trooped to France and in the process upgraded America’s global profile and President Woodrow Wilson’s reputation.

Without that war and its 10 million battlefield dead, The Lost Generation — artists and writers across the Western spectrum — wouldn’t have suddenly felt the urge to reinflate morality’s collapsed lung. Fictional Jay Gatsby, F. Scott Fitzgerald’s entitled but alienated scion, was an indirect issuance of a European madness that Roaring Twenties riches only shakily papered over.

But back to World War II, which began with Poland and ended with Nagasaki, the first a benchmark for the Holocaust, the second a harbinger for an extended nuclear winter. How, I ask myself, is a war still a war when reduced to WWII, abbreviated detritus that sounds more like a washing machine model or the second generation of some new pod or phone?

Therein the object lesson: Create terse totems, as in iPods and iPhones, and all else unconsciously tilts toward abridged chic. Text messages are a new dialect’s insider anagrams, with that same dialect a means to belong. Tweets, new age telegrams minus intimacy, make compression even more fashionable. And since all know WWII is World War II, what’s the worry?

Over centuries, compression and economy of speech have helped make writing more incisive. No one wants 100 commandments when 10 will do. Overstatement is a bad and contagious habit that first bureaucracy and now the blogosphere have worked to revive. At the same time, spelling things out is an intellectual discipline that differentiates prose from chatter. A president is a president, not a prez (though use of the latter, like WWII, is surging).

The effort entailed in spelling something out fully implies cognitive respect for the subject at hand. It’s also good manners. HC can be Harry Charles but not the Holocaust. Shorthand straddling can foul the subtle line between utility and disrespect. When the WWII of texts and Tweets becomes the way that a groundbreaking war is referred to in all prose, the war itself slips into shorthand.

Mass abbreviation is impatience personified as language. That same impatience puts transmission first and leaves the rest to the recipients. Which is fine so long as the recipients are uniform, informed, and able to distinguish priorities in the many truncated, out-of-context announcements that make up daily communication.

How many people any longer know the details of WWII? Most? Some? Few? Who knows WWII took a strange, prolonging twist when Hitler’s Nazi Germany betrayed Soviet Russia and invaded in 1941, a decision that gave communism and Stalin a boost, and Vladimir Putin a later raison d’etre? Who associates WWII with large pro-Nazi parties in Croatia and Hungary, with Vichy France, with the fire-bombing annihilation of Hamburg and Dresden, which Kurt Vonnegut survived to write about? Who mentions WWII in terms of civil wars that decimated Italy and Greece in the late 1940s?

What is it about WWII as an acronym that drains World War II or the Second World War of its lifeblood and clout? Perhaps the missing W words, as in “world” and “war.” Maybe the neutrality of the Roman numeral, which in the spelled out version makes it appallingly clear that what all assumed wouldn’t and couldn’t happen again, did. Maybe it’s just the sound of WWII, the scuffling antithesis to an ampleness of import that seems to put global war on par with Saturday Night Live.

Spelled out words and phrases exist in part to establish precision and ensure that history is spared the casual bypassing that contractions celebrate (WMD off-handedness has all but obliterated any keen understanding of atomic and hydrogen bombs). While there’s nothing wrong with bypassing, it has laxness in its genes, like driving below the speed limit in the left lane of a highway. The driver behind you may be smart enough to know you don’t know any better, or were poorly trained, or simply have bad manners, but that helps no one if your non-caring approach yields a wreck.