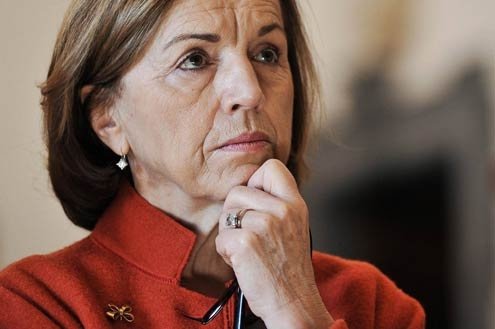 Elisa Fornero: "A job isn't something you obtain by right but something ... for which you may even have to make sacrifices." Even?
B

urying the lead is a journalistic no-no. It’s what happens when an essential observation or quotation is “buried” too deep in the body of the text, minimizing the report’s potential impact.

The Wall Street Journal made the mistake the other day in reporting a one-to-one conversation with Italian Labor Minister Elsa Fornero, the stalwart if preachy lightening rod for Italian labor reform.

Since December, she’s pushed to amend the pension system, overhauled the country’s retirement age policies, and is now working to modernize the ironclad no-firing protection contained in the country’s 1970 labor code.

While the WSJ piece underscored that Fornero’s goals were cultural as well as legislative, it left her most significant scolding for the final paragraph. “Italy is not a rule-bound place,” she told the paper. “It’s a land where people rig the system, tweak here and there, and engage in tailor-made adjustments.” That, she, added, “has got to stop.”

In fact, the entire southern Mediterranean basin is not a rule-bound place, instead long the Ottoman-style domain of riggers and tweakers who unlike Teutonic swordsman and Protestant moralists got what they needed by making ends meet on their own terms, with central law incidental.

Out of this came southern and eastern central bureaucracies influenced both by Catholic scheming and Napoleonic-era reforms that generated new laws while ensuring they also came with a class of people, accountants, trained to manipulate them.

Modern-day rigging and tweaking emerged from a period when central authority, whether the Church or a parallel tyranny, controlled most aspects of social and legal life, never entirely discouraging the clever from finding and exploit self-aggrandizing fault lines. That Fornero deplores so much dancing and dodging is in line with German didactic order but inimical to the shrewdness and moral relativism sewn into southern DNA for centuries. Saying Italy isn’t rule-bound simplifies the reality.

Europe’s ongoing woes, whether tied to the euro or central governance, reflects a normative difference deeper than anyone will comfortably admit. Germany is just as devoted to its a-to-b Protestant character as Catholic and once-Ottoman tinged countries are to visions of self-styled convenience. Proclamations of unity, however sincere, are not an automatic rope bridge across the maw.

Italy remains suspicious of dramatic changes to its economic landscape since it only recently emerged from nationwide poverty, not the case for England, Germany and France, which cleared that hurdle early last century. By contrast, Italy’s middle class is less than a half-century old. Mass car ownership didn’t come into being until the late 1960s. Labor legislation guaranteeing worker rights arose about the same time.

All of which makes Fornero’s comments enraging to those who either don’t believe in central authority or are skeptical of its ability to translate neatly packaged aspirations into working facts.

Italy, Fornero told the paper, was obliged to protect individuals – citizens, namely – and not their jobs, applying a citizenship logic closer to the give-and-take of Anglo-Saxon national belonging, namely a state as the sum of reliable collective efforts. “Work isn’t a right,” she added, “it has to be earned, including through sacrifice.”

The platitude — a grumpy Protestant norm — unsurprisingly generated a firestorm, since Italian law guarantees the right to work but makes little explicit mention of sacrifice, considered something more intimate. Italians have long approached the workplace not as a potential moral and intellectual sanctuary, a place than can edify and satisfy, but with a system that hands out the salaries necessary to support home and family.

So when Fornero says, “work isn’t a right,” Italians hear something profoundly and infuriatingly different, as in “a salary isn’t a right.”

It’s hard to champion the introduction of a streamlined marketplace in country whose employers, long in the clutches of trickle-down rigs and tweaks, still reserve the right to pay wages late or not at all, citing their own shortfalls. Germany’s resistance to Eurobonds and similar tonics reflects an awareness of social and institutional hiccups over which it has no control.

In a rigs and tweaks climate unlikely to change any time soon, making layoffs easier is a terrifying prospect to those whose lives are hitched to a guaranteed labor market.

Fornero and her team, says the WSJ, seek to revise Italy’s “entrenched and litigious” system. What it doesn’t explain is that entrenchment and litigiousness arose from obstructionism and opportunism, which helped usher in the now-deplored system of labor guarantees. The more stubborn the system, the more tailor-made tweaks stand at the ready, favoring shrewdness, soft landings, and postponement, all three central to the Italian day-to-day.

It’s a mentality that won’t change unless unpleasantly stubborn Fornero-like figures remain in place for decades, a highly unlikely prospect in an increasingly tumultuous political environment that begins to yearn for mini-demagogues (witness comedian-turned-politician Beppe Grillo).

Fornero’s own sense of the future was contained only in the transcript of the interview, and not in the piece itself:

“This reform is a wager on behavior changing in many ways. My big fear is we don’t overcome this challenge. Everyone, not just workers, have to understand and change. That includes youth, who need to know a job isn’t something you obtain by right but something you conquer, struggle for and for which you may even have to make sacrifices.”

That a 21st-century minister openly fears failure and feels compelled to qualify the notion of sacrifice with the adverb “even” suggests that rig-and-tweak Italy remains alive and well.