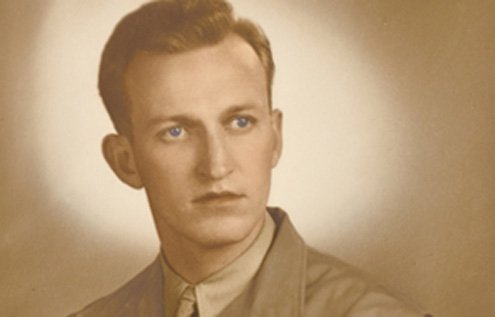 hen I first arrived in Milan in 2001 I often went to Libreria Babele, the great LGBT bookstore on Via San Nicolao near the city’s stazione nord, northern station. But the expansion of Italian publishing giants Mondadori and Rizzoli and the growth of Amazon made life hard for such bookshops. Libreria Babele eventually closed, as did many of the city’s other small independent booksellers. Though LGBT literature is far more available and accessible than it was 15 years ago, I still miss occasional weekends spent browsing the aisles and asking the staff for recommendations. I now do most of my browsing in my bedroom camped out in front of the computer. It’s not the same.

Last fall, I cyber-stumbled onto the Gay Men’s Book Club in New York City. It was a glad accident because many of their suggested titles interested me. One in particular was a novel called “The Gallery,” by Massachusetts-born and Harvard educated John Horne Burns. Burns led an intense and troubled life that led him from upscale American boarding schools into the military, and finally, after the war, into alcohol. He died at 37 in 1953.

Published in 1947, “The Gallery,” a bestseller at the time, was set mostly in Naples during the Allied occupation just after the retreat of Fascist and Nazi troops. Burns, stationed in Naples as a U.S. military intelligence officer, presents a series of character sketches and descriptions based on first-hand experiences and observations. Naples has always been a marvelous reflection of urban contrast and contradiction, unique even among Italian cities in both language and culture. Burns saw all this through critical and sensitive eyes. His scenes of postwar devastation conveyed a strong sense of futility of all conflict.

Most importantly, Burns challenged two myths about war and the military. First, that military men and women always stood for a “good and noble” cause, and second, that homosexual desire vanished during and after World War II. “Much of the lurid tempo of the city,” wrote Burns, “is from the stark raw sex hungers that stalk it as a natural ghost of the roughness of war.”

An unnamed American soldier narrates the story and all the characters are ambitious, driven and flawed. They crave intimacy, which ultimately leads them to the bombed-out 19th-century Gallery Umberto I, in what’s left of the city’s broken heart. There’s deliciously cynical Louella and beautiful Hal, who both have stories to tell. Yet Burns was also a product of a time when explicit descriptions of homosexual behavior were risky at best. He was careful, perhaps too careful, “as evasive about his own sexuality as a gay man of his generation had to be,” wrote David Margolick in a recent biography.

His Naples was spectral. He wrote of “palsied old women in black” collecting cigarette butts to sell; of local youth entertaining “various offers for the bodily needs and hungers.” In my favorite chapter he introduced Mama’s bar and its array of homosexual patrons. His descriptions would fit any number of gay bars I’ve visited over the years.

“The Gallery” is a rare and wonderful testimony to the lives and experiences of gay people, both military and civilian, lives all too often either ignored or erased from the historical record.

Living in Italy for the past 15 years as an openly gay married man, with no civil recognition of my rights (until the spring of 2016), and the Vatican just south of me in Rome, I felt cut off, as if stuck behind enemy lines. I wanted to join the resistance and participate in the “good fight” for gay human rights. I did that by starting this column five years ago, with the idea of chronicling excerpts from my life. So it is that I have unwittingly followed in Burn’s footsteps.

When I started out, I wasn’t really sure what I’d write about. I did know I wanted each column to have three characteristics: a LGBT (lesbian, gay, bisexual and transgendered) ingredient, an Italian context, and bits and pieces of my personal experience. My job wasn’t to go out and find the stories but to wait and let them emerge on their own. I listened for bizarre situations, revealing conversations, or unusual perspectives that everyone else seemed either to accept or ignore.

I tried to balance my columns by tackling as many topics as I could. I wanted to show how LGBT identity could touch practically every aspect of daily life. Most of all, I wanted to maintain a sense of optimism and irony — which would not have been possible if I’d limited myself to criticizing the Catholic church and the Italian government. I wanted to transmit a message of hope to LGBT people made to despair by the gross inequalities and injustices, both in Italy and elsewhere.

This fall I compiled all the articles I’d written from September 2010 through February 2016, re-editing them and organizing them by theme. That collection entitled “That’s Queer: Excerpts from my gay life in Italy,” which includes a preface by the magazine’s editor, Christopher Winner, is now available on Amazon (all of the individual columns can still be read free of charge on the site).

Despite the horror around him, Burns’ narrator mentioned the “individual goodness and loveliness” he sometimes saw around him. With Burn’s to guide me, I try to see it as well.