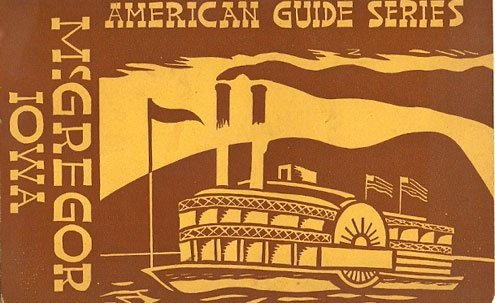 Brochures were produced for 48 states.
I

recently had several personal encounters with the Great Depression. None as a result of gloomy economic forecasts, but instead from being reminded of its remarkable legacy.

Encounter One: While waiting in a long line in the Lebanon, New Hampshire post office, with its Formica counters and modern office décor, I noticed a mural on back wall that seemed to hark back to a time when post offices and banks were palaces of the people. The mural showed a farmer with Soviet Realist-style muscles plowing a Cubist-inspired New England landscape of steeples and red barns. The painting’s regionalism, muddy colors and exaltation of labor embodied the art created under President Franklin D. Roosevelt’s New Deal Works Progress Administration.

The WPA put three million Americans from all walks of life to work in a variety of public projects. Painters and writers helped repair roads and buildings, develop vocational and literacy training, and even conduct historical research. FDR firmly believed in using work to restore national morale devastated by the Great Depression.

Encounter Two: A few days later in McGregor, Iowa among boxes of family detritus, lined with a newspaper reporting on the 1936 Berlin Olympics, I unearthed a brochure on McGregor whose style recalled the post office mural. It was part of the “American Guide” series produced by the Federal Writer’s Project, a WPA initiative that once employed more than 6,000 writers, anthropologists, historians and geologists, and covered 48 states.

Encounter Three: I visited Pike’s Peak, the Iowa state park high above the Mississippi that overlooks the juncture of the Wisconsin and Mississippi rivers. I’d been there as a child and remembered campfire breakfasts and hikes to caves where we’d scrape the brightly-colored, ancient sands of the Mississippi. The caves are now off limits but the log-bordered trails I recalled from childhood remain.

These trails were built by young men from the McGregor contingent of the Civilian Conservation Corps, another New Deal program that operated in U.S. parks from coast to coast, giving jobs to some three million young men and promoting conservation. Among the young men in Iowa was my mother’s brother. The employees received only $5 of their $30 monthly salary, with the rest going to their families.

Although my parents’ families saw Roosevelt as a populist demagogue backed by credulous socialists, my father spoke of New Deal programs with unexpected respect. Political bias was trumped by an innate faith in the value of hard work and in the program’s practical approach to problem-solving. This was enhanced by that generation’s unifying pride about surviving the Depression.

My close encounters with the New Deal and the Depression occurred against the background of the deficit ceiling fight in Washington and President Barack Obama’s Iowa bus tour.

If it gave me pause for thought, it should do the same for those who bang the drum of fiscal restraint and patriotism and see government spending on New Deal-like programs akin to Satan’s work.

Even at its height, the WPA faced criticism regarding its both efficiency and ideological tendencies. The economic significance of it programs was contested. FDR was frequently under attack. The idea of such projects today is unthinkable. They would be branded as “socialistic.”

No matter. Like Roosevelt, I believe that the moral significance of New Deal programs was unquestionable. They created what today’s strident patriots — and the rest of the world — consider quintessentially American. WPA photographers Walker Evans, Dorothea Lange and Berenice Abbot captured a stark, frontier spirit, while writers John Cheever, Saul Bellow and John Steinbeck — all members of the WPA — helped define contemporary American literature.

The CCC made America’s great outdoors accessible to millions and awakened the environmental movement. Park landscapes are fundamental to the American identity, an “entitlement” that is nationally enjoyed and internationally envied. And the soldier who raised the flag in the Iwo Jima photograph was a CCC boy.

Though my parents saw the WPA as “make-work,” it invested in youth who otherwise had little chance to acquire skills or training when a quarter of the country was unemployed. The CCC trained the most dangerous of the unemployed: unskilled young men. In essence, the New Deal invested in our parents and grandparents.

The American Guides series exuded a kind of pastoral patriotism, as if its writers recognized the Depression was vital respite from the frenetic Calvin Coolidge credo that “America’s business is business.” We could use such a respite today.

The guides were funded by the federal government but produced by the states. A similar collaboration between America’s “fly-over” country and Washington might heal the lacerating mutual contempt that divides the 21st-century United States.

Relief programs extended to both skilled and unskilled workers, to the educated and uneducated, and suggested class unity. New Deal programs made it clear we were indeed in it together.

We still are. But no one seems to have the vision, the courage or the humility to raise the point, and make it.