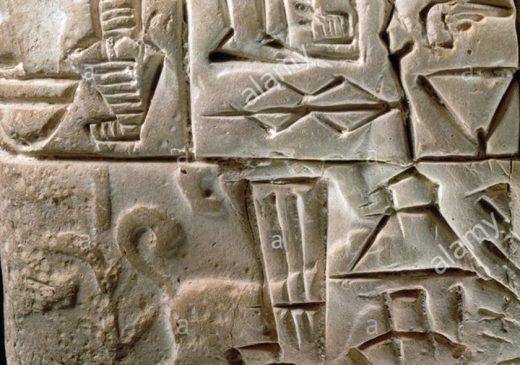 After the 2003 U.S. invasions, looters at Iraq's National Museum of Antiquities pillaged archives of cuneiform clay tablets written in the Mesopotamian era more than 2,000 years ago.
I

recently asked a class of college students if they knew the mythological story of Oedipus. I wanted to hear them say “the guy who killed his father and married his mother.” I could then say, “Well, actually, it was about a guy whose parents tried to kill him as an infant. How come nobody remembers that part?” Unfortunately, my punch line fell flat — again.

These attempts seem more and more fruitless as the years pass. Few of my college students have even the slightest idea who Oedipus was.

Sometimes I emphasize the universality of human yearnings using an example from Gilgamesh, the ancient Sumerian king, in which the wise innkeeper Siduri tells Gilgamesh to stop searching for eternal life, to go home, enjoy a nice bath, listen to music and dance, make his wife happy in his embrace, and hold his child by the hand. That, she says, is the life for a man.

But not only has no one heard of Gilgamesh, hardly anyone even knows who the Babylonians were.

Once I made a joke about my technological shortcomings, saying I’d barely emerged from the era of clay blocks and cuneiform. No one laughed at my self-deprecation because no one had any idea what I was talking about. (Is it any wonder that the collection of cuneiform tablets in Baghdad was so wantonly destroyed in post-U.S. invasion looting?)

Many students can’t spell. Fair enough. I didn’t go to any sort of preppy high school (quite the opposite), and most of the kids I went to school with didn’t go to college. But our 10th grade English teacher explained how French became the official language in England at the time of the 11th century Norman Conquest, and that the language we speak has a Germanic base and a multitude of French words. It made sense of our crazy spelling. It also made it easier to figure out how to spell tricky words based on knowing whether their roots were Anglo-Saxon or Norman-French.

“Perhaps the decline and fall of the Roman Empire, as much as any other ancient event, can give more insight into the present-day United States…”

From fourth-grade on, we studied history every year. Even now, more than 60 years later, I still remember imagining the Hanging Gardens of Babylon. History lessons ran from antiquity to the present and stuck with us in middle school, beginning again in high school.

I learned that the Roman Empire extended itself beyond its means and broke down as a result. (This told me something about growth for its own sake in any context). I studied how the feudal system emerged from post-Roman chaos. I learned how personal bonds of interdependence, as French historian Marc Bloch called them, led people to pledge allegiance and fight for lord and castle, receiving protection in exchange.

Understanding this opened the door to understanding feudalism in a more contemporary context, from the Mafia to Italian universities and hospitals — where the word barone, baron, often comes up (if unofficially). It also made sense of the fact that parents, knowing the scarcity of jobs, would turn to politicians to guarantee their son or daughter a posto di lavoro – a permanent public sector job – in exchange for votes.

We carry the past with us, even as individuals. Among other things, my role as a therapist can include offering someone an outside perspective, a witness not involved in family balances and parental pressures. Danger, along with the shoreline, can be hard to see in such murky waters. Someone on the outside may have a better perspective.

To me, psychology and history have a lot in common. A lack of curiosity about the past bodes ill for those trying to make sense of the present and imagine the future. Mistakes are made and repeated. And though many students study recent history, the kind still rooted in living memory, that does little to help with the bigger picture. The effects of World War II are still strongly felt, same with the Holocaust, fascism, and the division of Europe. They remain part of current events. Where no such living memory exists, historical perspective must be used in its place.

Perhaps the decline and fall of the Roman Empire, as much as any other ancient event, can give more insight into the present-day United States — in the same way a person outside a family can provide more perspective on the mechanisms at work in an individual’s story.

A student in a severe emotional crisis is afraid to take the semester off for fear of “losing” time. My perspective, given age and experience, affords a view that his friends can’t have: that time is never lost. Think of King George III, who, by stubbornly insisting on taxes, ended up provoking an uprising and losing his most valuable colony, or of the Renaissance popes who by reveling in corruption lost half of Europe. How could they know, without outside perspective to guide them, that to lose sometimes is to win.