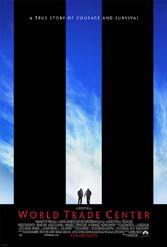 “We’re alive in Hell, how about that, John?” Hell, to Oliver Stone eye, is the Hieronymous Bosch detritus beneath the fallen Twin Towers where New York Transit Authority police officers John McLoughlin (Nicholas Cage) and Will Jimeno (Michael Peña) are trapped. Stone has made an effectively claustrophobic mine shaft disaster film using September 11 as shocking window dressing.

To his credit, Stone generally avoids the preaching and ideological pitfalls into which his filmmaking usually falls, leaving the tale of the two men to cover for the tragedy. Still, this is very much an “Is Daddy coming home?” flick, with all the requisite family flashbacks and maudlin hugging. Cage and Peña are stalwart in roles literally straight-jacketed by rubble. Stone is historically sensitive enough to make reference to the 1993 WTC attack, which few took seriously as a harbinger.

When McLoughlin is asked about contingency plans after the towers are hit, he’s dumbstruck: “There is no plan. We didn’t make it.” 2006.