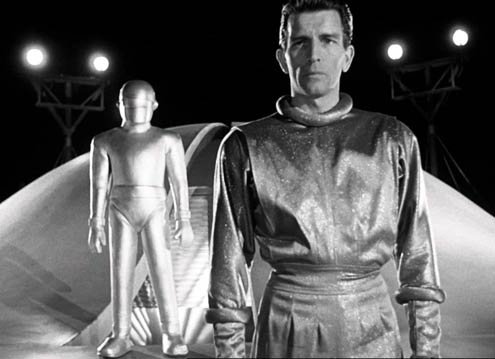 obert Wise’s 1951 sci-fi morality play, “The Day the Earth Stood Still,” deserves a remake once or twice a century, no matter how bad, if for no other reason than to remind the planet of the wan urgency stitched into Michael Rennie’s cautionary face. Rennie, as humanoid Klaatu, arrives in Washington, D.C. from another world with tank-melting robot Gort in tow. He naturally scares the locals silly. And of course they know nothing else but to shoot. Poor Earthlings.

But the story takes a UN twist when it turns out Klaatu isn’t a warrior but a momentous messenger. Nuclear-silly earth (only recently H-Bomb wise) had better stop threatening to blowing itself to bits, say his chiefs, or Gort and his robot race will jump the gun and clean up the planet’s lethal juvenile delinquency on their own (“I am fearful when I see people substituting fear for reason,” says Klaatu)

Though Klaatu makes friends and influences people, he never really convinces anyone to substitute reason for fear. Which leads to the parting shot: “It is no concern of ours how you run your own planet, but if you threaten to extend your violence, this Earth of yours will be reduced to a burned-out cinder.”

Wise dishes out his share of saucer-era B-movie silliness, and Gort is no match for the digital age. Patricia Neal is also wasted as Klaatu’s confidant and the mother of a requisite “little boy,” in harm’s way of course. But nothing detracts from the film’s universal message, as fresh now than as in 1951. As for Keanu Reeves and Scott Derrickson’s 2008 remake, as they say in Soprano-ese, “fugget about it.”

Idiosyncratic travel writer Malcolm Leary (William Hurt) is depressed if not emotionally crippled following the death of his son. His wife Sarah (Kathleen Turner) can’t bear him any longer and he moves in with his sister Rose. Enter dog-trainer and single-mother Muriel Pritchett (Geena Davis).

And what an entry it is, since Prichett makes it her self-appointed role to revive impassive Leary, which she does by refusing to accept the ordinariness of daily life and insisting he follow her quirky lead. A study in grief turns into a tricky love story. Though Leary is literally leery, the incandescent Muriel prefers action to insinuation.

Funny and touching, the film stops short of outright comedy. There’s just too much debris. Hurt and Davis, both in their prime, are a delight to watch (Davis won a best supporting actress Oscar). So is the rest of the Leary family, with its own set of problems.

Problems are the only game in town in “Lost in La Mancha,” Ken Fulton and Luis Pepe’s 2002 documentary about Terry Gilliam’s Herculean but abortive attempt to film a movie about Don Quixote (“The Man who Killed Don Quixote”) two years before. If you think you’re having a bad day, check this out.

First, the money’s tough to get (the project was Euro-funded). Then, the lead actress is fickle. Finally, the male lead, Jean Rochefort as Don Qixote, gets sick in a big way. Meanwhile the rain in Spain falls and falls — in a place where, at least in theory, it never should.

Gilliam meets his travails with a lunatic’s esprit, telling himself it’ll all work out for the best. But it doesn’t. Which is when even the stalwart Johnny Depp begins to flake (ironically it was his companion, French singer-actress Vanessa Paradis, who refused to show).

It’s folly-within-folly, since you have both windmills and Gilliam, who is a windmill of his own. Few consider the rigors involved in trying to assemble a major production. By focusing on Gilliam’s misadventure, Fulton and Pepe create a new mini-genre: movie-making gallows humor.

“At least if we’re going to be fucked, let’s know we’re fucked ahead of time,” barks Gilliam. But that’s just it: He never knows (The project was restarted in 2009, but has since stalled again.) Jeff Bridges, who starred in Gilliam’s “The Fisher King,” narrates the original sad story with empathetic gravity.