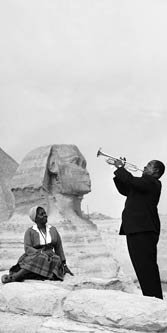 #8220;We’ll have so much fun! Come on! We have to go together!” The message came from my new friend Tracy. Filled with irrepressible enthusiasm, she proposed a 10-day trip to Egypt.

I was reluctant. We hadn’t known each other very long and if we didn’t mesh, there’d be no escaping.

I expressed my reservations.

“Do you think we’re compatible travel companions? I’m not into fancy hotels and I pack really light.” I explained.

“Oh really? Me too,” she replied decisively.

“And I like to move fast, taking in as much of a country as possible. I don’t get much vacation time and I try to make the most of it.”

“Oh yeah, I totally agree. Do you like shopping?”

“Not really. I like to walk through markets but I never buy anything,” I said.

“Yeah, I hate shopping too. It’s such a waste of time. I would rather have experiences than things: talk to locals and meet new people.”

It was uncanny. Our styles seemed too compatible to be true. Still. I wasn’t completely convinced. Yet Egypt was a country I wanted to see, so I agreed.

Our itinerary was standard: Luxor, Hatshepsut’s Temple, Abu Simbel, and the pyramids at Giza. We planned our trip over the phone and took off for the dusty streets of Egypt.

The trip was a dream. Locals showed us secret caves in the Valley of the Kings and we hiked to tombs and temples on the village path. On bikes we raced donkey carts down the streets and a young Egyptian couple invited us to share in their engagement celebration. We ate the local dishes of kosher and kebabs, and sailed a felucca down the Nile.

It was just as Tracy said it would be: so much fun.

We agreed we were perfect travel companions and talked excitedly about where we’d go next. We were going to see the world together.

But life had other plans. When we returned to New York, Tracy’s boyfriend proposed and within months she was married. She moved deep into New Jersey and I rarely saw her. I tried to be happy for her, but I was depressed.

“I’ll still be able to travel with you,” Tracy insisted. “Just because I’m married doesn’t change that.”

She cheered me momentarily, and we pondered a trip down the Amazon. But within several months my hopes were completely dashed. She told me she was pregnant.

“Congratulations,” I said. But inside I was despondent and she knew it.

“Don’t worry, we’ll travel together just like we planned. Once I have the baby we’ll get out again, you’ll see. I’m not going to be your typical mother.”

I replied with pleasantries, barely hiding my skepticism. Tracy had never been around children and had no idea what awaited her. Motherhood was an adventure like no other.

Over the first year of the baby’s life, we stayed in touch as best we could. Tracy was adjusting to several life changes at once and there was little time for trips to Manhattan to see friends. But I missed her and the friendship we shared in Egypt.

Just for fun, I ventured a long-shot proposal similar to her first one to me. I knew her answer, but wanted her to know I hadn’t forgotten her promise.

“Tracy, How about a trip to Bhutan! Come on! We’ll have so much fun! We have to go together!”

Tellingly, it took her days to get back to me.

“I would love to but I can’t now. It’s so tough to be a mom. I had no idea it would be so hard. You can’t go anywhere when you have a small child at home: I am exhausted all the time.” Her voice was tired and her irrepressible enthusiasm was gone.

Motherhood was taking Tracy on a journey without leaving her home.

“I hope you’ll still go,” she said. “I’m so jealous you can travel. I’m going to be stuck here for awhile.”

I thought about Tracy’s love of meeting new people and having experiences. As a wife and mother, she was doing both.

As for me, I’d just have to find someone else with whom to see the world.