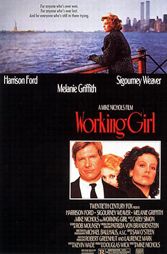 A lovable piece of taffy with Harrison Ford, Melanie Griffin, Sigourney Weaver, and young Joan Cusack. Former secretary Tess McGill (Griffin) gets a Wall Street windfall after boss Katherine Parker (Weaver) breaks a leg on vacation. When Tess discovers that Parker was lifting her ideas, she’s emboldened to reshape herself into an ersatz executive and woo high-stakes trader Jack Trainer (Ford) into pushing a major deal.