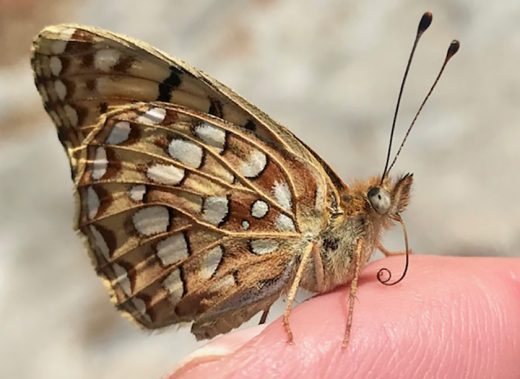 Insects are in peril the world over, but the focus on remedies is vague at best. Photo by Joe Scott.
A

few months ago, I was in the Sudtirol region of Italy, hiking through the Dolomites with a group of Sierra Club members. It was spectacularly beautiful, particularly when we got to the top of Mt. Lagazuoi after a fresh snowfall. Looking out over that stunning panorama of mountains and valleys, I was struck with gratitude for the beauty of this earth and my good fortune in having the opportunity to see so much of it.

Since this was a trip sponsored by the Sierra Club — an American ecological organization founded more than a century ago — the leaders were careful to schedule some activities that would heighten our awareness of environmental concerns. Among these activities was a visit to a beekeeping museum located on a six-century-old farm on the Renon High Plateau near Bolzano.

An expert gave a lecture about bees, beekeeping, and the history of the farm. Afterward, he allowed some time for questions. Someone in the group asked him about colony collapse disorder (CCD), which causes the disintegration of hives. CCD is usually caused by an unidentified disease or environmental factors, or a combination of disruptions. The expert replied that CCD is of great concern to beekeepers because it has reached epidemic proportions and no one knows just what triggers it. But bees, he added, will survive thanks to beekeepers. Bees won’t disappear. Hives can be replaced.

The rate of insect depopulation and extinction deeply worries experts the world over.

Much more worrying, he continued, was the rate of depopulation and extinction of other insects. He cited some statistics from different parts of the world that appeared to confirm a massive decline in global insect populations. I already knew about some of the data, included in a report published by Bavarian entomologists working near Munich. Since 1982, the group has been releasing an annual census of winged insect populations in the region.

Their findings have been widely publicized under headlines such as “Insect Armageddon” and “Insect Apocalypse,” hysteria their data seems sadly to support.

Studying wide areas of German nature reserves, the group concluded that, over the last 27 years, winged insect biomass (the literal amount of living matter) had dropped by 76 percent. These findings came as a result of on-the-ground, gumshoe reporting, not statistical speculation.

This shocked me. News of this kind shouldn’t need alarmist headlines. These numbers speak for themselves.

Yet none of the participants on this hike in the Dolomites took any notice of the remarks made by the beekeeping museum expert. None knew anything about the German studies or of similar studies confirming what the German trend indicates.

I struggle to understand how this information has made no impression on members of an organization devoted to educating people about environmental issues.

Aside from the diligence of beekeepers, will anything be done to reverse this impending calamity? One report about the German findings noted in passing that getting academic funding to further study the phenomenon, given the scale and duration of the work involved, was all but impossible to hope for.

The insect Armageddon is moving ahead without much fanfare. But what about the effects of this mass extinction on the state of the global environment? And what of the environment itself? This is a planet whose atmosphere is increasingly contaminated by noxious concentrations of greenhouse gases, a fact that has been repeatedly well-publicized.

Under the terms of the Paris Climate Accords, the signatory nations have pledged to reduce carbon emissions to meet a target of no more than 2C of additional warming. At the same time, it was known that this target, even if met, would not by itself avoid widespread human suffering caused by the global warming trend.

To produce any benefits, the target should have been 1.5C (though many nations informally pledged to set 1.5C as their goal).

But if you examine the newly-released United Nations’ “Emissions Gap Report 2019,” the largest emitters of greenhouse gases — the United States and China — both expanded their carbon footprints last year. The Paris accords were simply not realistic. Even if all the signatories did as they promised, the actual warming produced would be closer to 4C. Add to that the decision by the U.S. to pull out of the accords altogether.

None of the participants took any notice of the remarks made by the beekeeping museum expert.

On that Sierra Club trip to Italy, one of the leaders read from the 2018 South Tyrol Climate Report, emphasizing the positive message that climate change is a peril that can be effectively confronted if people work together. Nice words. And the Sierra Club does well to make people more aware and concerned.

But I am frankly well beyond the “aware and concerned” phase. I am far closer to being enraged — much like climate activist Greta Thunberg, who brings admirable passion to to the subject.

Yet when I listened to the Swedish 16-year-old furiously lecture the upscale crowds at the 2019 World Economic Forum at Davos, and watched them leap up to give her a lengthy standing ovation, it struck me suddenly that (unintentionally of course) she was providing them with cover. By applauding her, they were signaling that they, too, wanted the best for the planet, and for humanity. But cheering Thunberg is probably the only thing they’ll ever do for the environment.

This is hardly a cheering message to deliver as Christmas nears, but it’s all I’ve got.