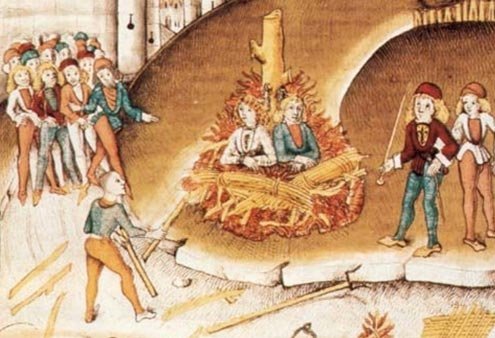 The burning of two sodomites at the stake outside Zürich in 1482, by Spiezer Schilling.
&

#8220;Sticks and stones may break my bones but names will never hurt me.” Many may remember the mantra of tormented children. Name-calling is just one aspect of bullying, but — as people are increasingly realizing — names can do far more than injure a person’s self-image and confidence. They can also kill.

Ask Joe Bell of Oregon, who is walking across the United States in tribute to his 15-year-old son who attempted suicide and eventually died on Feb. 3, 2013 after being tormented both online and in person because he was gay.

In “Dude, You’re a Fag,” her 2007 study of California high school, sociologist CJ Pascoe reported that teenage boys proved their masculinity by ridiculing others boys who failed at heterosexual prowess or fell short on strength. “To call someone gay or fag is like the lowest thing you can call someone,” one teenage boy told her. “Because that’s like saying that you’re nothing.”

In North America, “fag” or “faggot” is perhaps the most commonly used pejorative term for gay males. Its use as an anti-gay insult has spread throughout the English-speaking world via mass media.

The word “faggot” originally derives from Old French, Italian and Vulgar Latin and means “bundle of sticks.” It has been used in English since the late 16th-century as an abusive term for old or bothersome women who gathered and sold firewood. According to popular gay myth, the word “faggot,” as “bundle of sticks for burning,” was applied to homosexuals, accused witches, and heretics — all of whom were burned at the stake. If this connection seems tenuous, there’s no doubt the word at the very least implies someone who is of no value, bothersome or useless.

More recently in England, the term “fag” referred to younger boys used as servants who sometimes performed sexual services for older boys in British “public” school. “Faggot” and “fag” are still in active use in England as slang for a cigarette, while the words “queer,” “homo” and “poof” are commonly used as pejorative terms for gay men.

In Italy, especially in the north, finocchio — which literally means fennel, an herb — is equivalent in meaning and insulting purpose to “faggot.” Giovanni Dall’Orto, Italian gay journalist, writer and historian, explains the word originally came from Tuscany, with popular gay myth suggesting that fennel may have been used to mask the smell when people were burned at the stake during the Inquisition. Finocchio was known as a cheap, almost valueless seasoning when compared to the more expensive imported spices and seasonings of the time. The word was used to describe a person of no value and eventually became a common insult for homosexuals.

African-Americans, Jews, immigrants, women and others have also long been the target of verbal attacks. As a kind of linguistic inversion, some individuals within these targeted groups adopt and use derogatory labels amongst themselves. Gay people commonly use the words “faggot” and finocchio, either in jest or criticism of one another.

Some see this as an expression of self-loathing and internalized homophobia. Others regard it as an expression of solidarity. The victims and targets claim the exclusive right to use these labels by virtue of the common abuse they’ve endured, thus stripping the insults of their power and their ability to cause suffering.

In a recent music video titled “Define Me,” Ryan Amador and Jo Lambert got to the way insults and labeling can rob individuals of their humanity and worth. Amador holds out his closed hand then opens it to the camera. The word “fag” is written on his palm. Lambert holds out her hand and the word “dyke” is written on her palm. As they sing, “You can brand me or burn me and I won’t let it hurt me,” they remove their tops to reveal disparaging, anti-gay epithets written all over their torsos.

Labeling and name-calling is all too often are followed by action. On June 21, 2012, at his 18th birthday party, Steven Simpson, a gay autistic youth from South Yorkshire, England, was stripped and homophobic slurs scrawled body. He was then doused with suntan oil and set on fire, starting with his groin area. Simpson suffered burns over 60 percent of his body and died two days later. His assailant, Jordan Sheard, who agreed to manslaughter charges, received a three-and-a-half year sentence but will be paroled after 21 months prison time.

Regardless of their precise etymologies, “faggot” and finocchio are words that burn and kill.

As Joe Bell says, “When a child is bullied there are usually a lot [of] witnesses.” Those who watch and do nothing, he says, “are just as guilty. They are saying that it is acceptable.”

And acceptability has bad habit of sticking. In mid-May, the European Union reported that more than a quarter of the EU’s gay population had been attacked or threatened with violence over the last five years, with two-thirds still afraid of showing their sexuality in public. The EU’s Fundamental Rights Agency’s survey highlighted two familiar words: fear and insecurity.