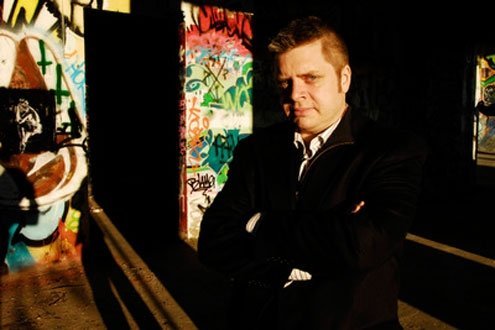 Musician and author Paul Hardy was once a drummer in an alt band.
W

ith its astonishing starfall of words Paul Harding’s debut novel “Tinkers” easily nabbed the 2010 Pulitzer Prize for fiction. These are 191 pages of some of the best, explosive word-mongering in American literature. A book best read straight through. The writing is so stunning, and flashbacked with internal references, that it can distract from the tale. It’s a paean to life, and very definitely a non-sectarian but “religious” vision.

If it seems ungrateful to fault a prose cornucopia, it is true that Harding’s finely wrought language veers toward the overwrought. Whitmanesque and Faulknerian sections boost the visionary tone. But they can be out of tune with character. They seem to take flight from the book. And this despite the tight, spare narrative structure Harding crafts as container. Because the plot, at least, is quite straightforward. It covers the last eight days of George Washington Crosby’s life.

At 80-plus George lies dying on a hospital bed in his living room, his entire family in attendance and wait. At novel start, he no longer recognizes their faces, and begins to hallucinate. These initial pages race, with vigorous fresh images and insistently paced lines. By fantastic leap, this prose surge connects a failing mind’s “hallucination,” to the out-of-the-body experience of another human being, his father.

Day one: George imagined floor and ceiling collapsed. From the basement, he saw skewered wires and splintered boards overhead. The lifetime of his two-storey home covered him: old graduation photos and laid-aside clothes. “Then the roof caved in. The very blue of the sky followed, draining into the basement’s concrete socket. Next fell the stars… finally the black vastation itself came untacked and draped over the entire heap, covering George’s confused oblivion.”

Fitfully, he enters the mind of his “lost” father Howard Aaron Crosby, an epileptic tinker traveling the Maine woods. His horse-drawn wagon is fitted with repair tools, boxes of pins, ribbons, and the odd useful bowl. Visiting isolated hardscrabble farmhouses, Howard could always solder a pot, or take off the back of an old clock and repair it. After George retired as school counselor, he casually began to buy old clocks, tinkering with them. He became a collector, and clock repair specialist.

As George approaches day eight and death, the minds of father and son, both clock-tinkers, have seamlessly merged. Horologist metaphors design the novel’s central, metaphysical conceit. Emulating George and father, the author takes the back off the world’s clock, examining the mainsprings and meshing gears of existence.

Incredibly powerful stream-of-consciousness pages drive this examination. Since they’re attributed to Howard’s burning, electrified seizures, they suggest some probability base. For Harding’s fraught exploration of the visible and invisible world, and, finally, the unknowable “purpose of the Cosmos.”

To enhance credibility in this fantastic tale, passages from George’s old diary recur in the narrative arc. Some “copy” a hyperbolic, 18th century clockwork-metaphored work (Harding-invented): “The Reasonable Horologist,” by one Rev. Davenport. Other, anonymous sections, describe “Cosmos” phases. How everyday-George was ever drawn to such language (or understood it) remains a reader-puzzle. But… for author purpose: these inserts parallel his own constantly elaborating language and closing cosmic overview.

Did you notice? Harding’s pretty close to the semi-mystical heart of our Puritan ancestors. And to the generations of social and literary “Truth-Seekers” and “Yay-Sayers” who have howled across our cultural history. Yet Harding goes further. Through language alone, he evokes another person’s entire sensory experience. The Howard-through-George visions outline an impassioned, intuitive search for some rip in the universe-pattern, which will reveal its meaning.

George “lost” his father one night when Howard returned home with his wagon, and suddenly realized how bitterly his family feared his raging attacks. Passing their lit window, he drove into the woods. Here, hardships encourage burning brain-fires, followed by frozen, semi-consciousness. In this out-of-the-body state, he travels from Maine to a final stopping point — and new identity — in Philadelphia. There his seizures are less violent… and lose their mystic quality. They no longer probe the membrane-dividing mind from mind and animate from inanimate worlds.

It’s the ecstatic attacks of his pre-Philadelphia life which define the book’s focus: “Howard, by accident of birth, tasted the raw stuff of the cosmos.”

Few writers have handled this “raw stuff” with more astounding language than Harding. Few have been as content to invent a Rev. Davenport voice, to glorify our lives as simply “ignorant of the purpose of the world… beyond the fact that there is one, assigned by God and known only to him, and that it is good, and that it is terrifying and that it is ineffable.”

A question. Now that Harding has gulped down the entire Cosmos as his first act, what’s left for his second?