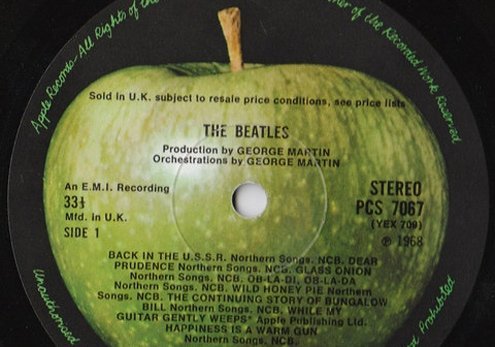 White on the outside, green inside.
H

ave you ever wondered if The Beatles knew the name “The White Album” was redundant? After all, the front and back covers were… white.

Linguistic forms and their history — known as etymology — fascinate me.

As a student of Italian, I’ve noticed that many Italian roots correspond to English ones in words of similar meaning. Calcio is close to “calcium”; foresta to “forest”; stazione to “station”; and spettacolo to “spectacle.” It’s not surprising since English gradually evolved from ancient German and Latin.

After seeing the Italian word forestiero, meaning foreigner, I ran to my flatmate’s etymology dictionary to find the Latin connection, which is foris: A foreigner is someone who comes from the outside or from places unknown, represented by a forest. It’s another example of seemingly different words emerging from the same idea.

While waiting for a train I pondered the word stazione, which comes from the verb stare — to “stay” or “stand.” Its offspring are countless: “stay,” “stand,” “station,” “static,” “status,” “state,” “stadium,” “stagnate” (from stagnum for standing water), and “stage.” All relate to staying in one place.

“Stage” interested me because of its Italian usage. In Italy, a stage means an internship. In French (as well as English), stage signifies the period or step in a process or development, hence the internship link. We use “stage” to mean a place to perform or any raised area that will hold people for a certain purpose. Latin roots again.

Speaking of roots (radice in Italian), I can’t cut a radish anymore without thinking of Emma Goldman, car stereos, π (pi), and razors. Emma Goldman was an anarchist, a “radical,” someone who sought to uproot the system. Anarchists seek to “eradicate,” from the Latin radicitus, radicula, and rado. A razor comes from rado and its form rasum, to “erase” or “raze.” Cars have radios, from the Latin radio, meaning to gleam or radiate.

And 2πr, the mathematical expression for circumference, would be meaningless without the Latin radius meaning “staff” or “rod.” “Rad-” signifies the source, as well as the “stem,” “rod,” or energy that grows from that source, and the scaling back of something to its source. The word has come full circle.

Speaking of full circle, back to The Beatles — whose 1968 “White Album” was really just known as “The Beatles” (“The White Album” came from fans). A pudding recipe that called for only the albumi, egg-whites, led me to wonder how egg-whites came to be known as albumi, and what they had to do with music and photo albums.

I pondered, baked, and finally turned to the dictionary. “Album” comes from a Latin term for “white.” In ancient Rome, an album was a large wall in the town hall where scribes carved the latest news into a fresh coat of bright white plaster. The white tablets on which they wrote were also albums. As a result, Italian produces such words as albumi, “egg-whites,” and alba, “dawn,” which refer to color and light. In English we have “albums” as collections, whether of news articles, photos, stamps, or songs.

The Beatles themselves are part of etymology. The Beatles are conspicuously not The Beetles. The band was first known as “Johnny and the Moondogs” and then “Long John and the Beetles.” No one really knows the source of the final twist. Maybe it was the “beat” of the music or the “Beat Generation.” “Beat” in the sense of “beatniks” and “beatitudes” is another Latin legacy, stemming from beatitas and beatitudo, meaning happiness and blessedness.

Let’s play a game. If you like it, it’ll keep your mind busy for the rest of your life. The Latin stem spect- concerns “sight” or “appearance.” Think about some of the words included in that range. “Inspect,” “inspector,” “spectator,” “spectacles,” “aspect,” “speculation,” “specter,” “spectacular,” “spectrum,” “expect,” “expectation,” “respect,” “introspective,” “retrospective,” “perspective,” “prospect,” “suspect” …

The sky’s the limit, idioms are another story.