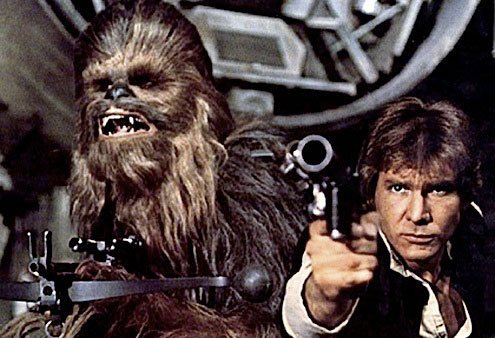 Did I have a sick crush on Harrison Ford? Yes.
I

n 1980, I celebrated my eighth birthday by taking four of my closest friends to see “The Empire Strikes Back.” It was the second time I would see the film, insisting that all I wanted for my birthday was to watch Han Solo go into the carbon chamber. My parents were confused. Was I obsessed with death? Did I have a sick crush on Harrison Ford?

Yes, I loved Han Solo and I didn’t want to believe he would be frozen for the rest of his life and that I may never have the chance of marrying him. But more importantly, I wanted to see Chewbacca cry. I was obsessed by the moment when Han descends to the bowels of the carbon chamber and Chewie pounds his chest in sorrow.

Since that day, I’ve always wanted a wookiee (correct spelling: 2 “e”s), a tall, strong, hairy, faithful friend who would defend me with guttural growls and Mick Jagger flair. I was the living version of Verucca Salt from “Charlie and the Chocolate Factory,” “I want a wookiee now, Daddy!”

My father patiently told me that wookiees were the fictitious property of George Lucas, and that I would just have to wait until the next film to see Chewbacca. To appease my bratty self, he bought me an action figure. I wasn’t satisfied so I cut my hair in a shag to signify my solidarity with the wookiee world.

The hairstyle grew out and I grew up, always having a soft spot for hairy beings — examples: my younger sister Christina during her hippy years of dreds and not shaving; and my peloso ex-boyfriend Ed.

Twenty-three years later, a real wookiee arrived in mini form. After Christina moved from Los Angeles (where we both lived) to Hanoi, my mother adopted a small Yorkshire Terrier to fill her void.

Bella was ragged, skinny and frightened, shaking her tawny mane with a true wookiee growl. She’s got the look, and, more importantly, she has the wookie personality.

By definition, wookiees are peaceful, tender and gentle (see: www.starwars.com/databank). But when angered, they “can fly into a berserker rage and will not stop until the object of their ‘distemper’ is destroyed.” Bella, too, loses her cool around buskers, bad boyfriends and bad haircuts. She growls at the mere sign of ill will — postmen, suitcases, helmets and brooms. Her tender side is revealed when she softly cries as I enter my silent carbon chamber called “working at the computer.”

When driving, she is the true wookiee co-pilot, air surfing out of the window and kissing policemen when we have been pulled over for various infractions like wrong turns. I’d even called her Chewie if she wasn’t female, and if it didn’t take a year to adjust to a new name.

Nit-picky Star Wars fans might want to remind me that she is too small to be a wookiee (they are at least two meters tall) and that wookiees are bipeds and probably have opposable thumbs.

I agree with the details, but again, I stress it’s the personality and hairstyle that make it extremely probable that she is a close cousin to the inhabitants of Kashyyyk. (By the way, what’s the point of nitpicking my fantasy if it comes from a fantasy film?)

So with my fantasy come true (aside from the Han Solo marriage), what more could a girl and wookiee ask for this holiday season? A bit of patience and thought when considering giving a pet as a gift. Ugly purses from your boyfriend can be returned. A pet can’t. Remember — it’s unwise to upset a wookiee…