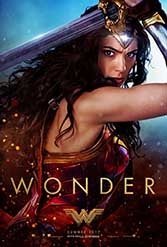 “Wonder Woman” is the action film women and girls have been waiting for. And men and boys.

The backstory of Diana, the DC Comic heroine, unfolds on the idyllic island where Zeus has hidden the Amazons. Exchanges between the young Amazon’s mother, Hippolyta (Connie Nielsen), queen of the Amazons, and her aunt Antiope, their best warrior (an appropriately severe Robin Wright) explain how the island, and its only child, came to be. Then man enters this sheltered world, in the form of an innocent-looking, charming, sometimes comic Steve (Chris Pine). Dressed as a German, he is forced to reveal he’s an American spy. And once man enters, so does war and the stereotypical enemy, the Germans of World War I.

Scenes of battle start slowly with the Greco-costumed women practicing on their island, a landscape of greens and golds surrounded by a deep blue sea. Reality intrudes in the trenches of World War I, where the palette is stark and dark, the scorched earth of that “war to end all wars.” The culminating action pits Diana against the god of war, Ares, in a fantastical, sci-fi blaze of light and sound.

Gal Gadot, an Israeli actress and martial artist, combines strength, beauty and subtle humor in the title role. As an opening and closing photograph illustrates, she can be the inspirational leader of a rag-tag group of men, a naïf in the 20th century, and savior of the planet. Beginning with a stilted perception of the world, Diana slowly gains a sense of the human, of the possibility of love — and even sex.

The simplistic love-conquers-all ending belies the more sophisticated story-telling and range of genres (including caper and rom-com) that make “Wonder Woman” this season’s best action film.