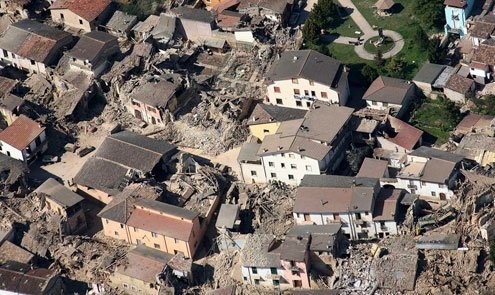 In L'Aquila, some properties held up, but all too many not.
&

A moonless late night walk on an Umbrian hillside near my home. Seconds after I go back inside the ground begins moving. I feel a subterranean rumbling like an undertow in reverse. In a flash, the house is shaking, glasses, dishes and pitchers dancing in place. Then comes silence. The post-earthquake tenseness slowly subsides. I exhale deeply. How, I marvel, did the house remain standing? I am overcome by a grateful sense of wonder.

Earthquakes are a daily occurrence worldwide. Italy recorded 21,000 in 2013 alone. Most involve minor tremors that cause no damage. Many go unnoticed except by geologists and statisticians.

On April 6, 2009, the city of L’Aquila, perched in the mountainous Abruzzo region of Italy, was far less fortunate. An earthquake measuring 6.3 on the Richter scale hit the area, leaving 306 people dead and 1,500 injured. More than 15,000 buildings were damaged or destroyed and some 65,000 people left homeless.

The most unsettling part, however, was that not all of this had to happen. Some of the buildings reduced to rubble had construction flaws later attributed to poor concrete quality and badly joined walls. Seismic protection was all but nonexistent and building codes rarely enforced. Government and contractor negligence, some of it tied to corruption, was rampant. In that sense the Abruzzo quake was kin to the 1906 San Francisco earthquake that killed more than 3,000 people and destroyed an estimated 80 percent of the city

In San Francisco, builders had cut costs as the city grew into a major West Coast metropolis. Building techniques were poor and materials haphazard. Worse, the city sat on a soupy supporting landfill composed of loose earth, old timbers, rocks and debris.

After San Francisco, architects, engineers, city planners, builders, and manufacturers began making earthquake protection into a priority. Their advances have been dramatic and dynamic.

The Frank Gehry-designed Walt Disney Concert Hall in Los Angeles, completed in 2003, has an anti-vibration isolation system that separates the hall from its concrete base using rubber ball bearings. One World Trade Center in Manhattan has a reinforced concrete core surrounded by a steel “moment” frame that sit on a 40,000 square foot (3,716 square meter) bomb proof podium. Efforts to create buildings that absorb and release energy without causing damage are gradually being adopted globally. Rome’s MAXXI museum, designed by Zaha Hadid before new anti-seismic codes, was “retrofitted” with shock transmitter units at its structural joints.

The Babylonian Code of Hammurabi (1772BC), considered the forerunner to all subsequent codes, includes a stark provision: “If a builder build(s) a house for someone, and does not construct it properly, and the house … fall(s) in and kill(s) its owner, then that builder shall be put to death.”

Though only China still applies capital punishment to negligent construction, penalties remain severe. According to Italian civil law, the owner of a building that collapses is liable for all damages unless he can prove a construction flaw didn’t cause the incident. If there is such a defect, the owner remains responsible even if he’s not at fault.

While there is a force majeure exception, it does not apply if a building is in a seismic area and has not complied with specified codes.

But even code drafters have their shortcomings. Some still favor rigid reinforced concrete structures when seismic history suggests such a choice is unwise at best.

After examining decades of earthquake data, Harvard-educated architect and conservationist Randolph Langenbach concluded that traditional non-engineered timber and masonry structures were far sturdier than modern ones built from reinforced concrete. He cited three quakes — 1976 in Tangshan, China, 1999 in Kocaeli, Turkey and 2010 in Haiti — that together left more than 500,000 dead.

In examining Italy, Langenbach noted the success of the so-called casa baraccata, a simple wood-framed, one or two story home made from brick or regularly shaped stones, quality lime and sand, and built on rock or firm soil.

The Bourbon government mandated such a design following the devastating 1783 earthquake in Calabria. But by 1908, when the Messina-Reggio quake struck, it had been largely set aside. Both Sicilian cities were all but leveled. According to an Italian Royal Committee report issued in 1909 — Italy was still under its monarchy — casa baraccata-style building would have greatly limited the losses.

Traditional housing — humus in Turkey, taq in India and baraccata in Italy — reflected the reality of widespread poverty. Costly materials and elaborate design were a luxury. For Langenbach, wise building practices depend on a willingness to preserve time-tested local methods.

In my Umbrian hill town, many homes are made from local stone and quarried concrete. Wooden timbers and steel are carefully combined using ancient practices. While Umbria has suffered its share of powerful earthquakes, damage has been limited in those towns where the local population adheres to traditional building practices.

Far more than physical labor, safe construction demands attention to detail and eye for history. The fate of L’Aquila’s vulnerable buildings represents a cautionary tale to anyone contemplating buying property in Italy. With the purchase of any home, there is more to consider than what meets the eye.