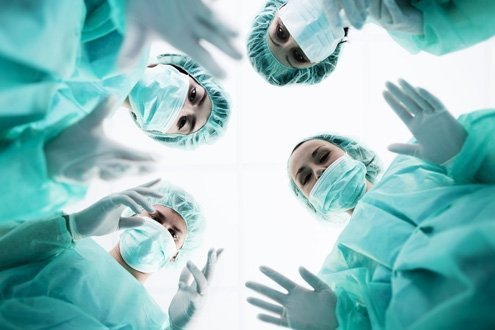 Despite male-female balance in American medical schools, women have largely steered away from surgery.
G

rowing up, I saw men and women as equals. That’s how my parents raised me. As the oldest of three girls, I was my dad’s partner when it came to home remodeling activities (his “therapy” outside of own medical career). We’d go to the hardware store together, or the lumberyard, then out to lunch. He taught me to drywall, spackle and paint. When my sixth-grade physical education teacher focused on football, my dad taught me to throw a tight spiral and to punt.

But my dad also reveled in the impromptu ballet dances my middle sister and I initiated in the living room, prancing to “The Nutcracker Suite” in our lacy dresses and patent leather church shoes. He and my mom attended every one of my sisters’ gymnastics shows, and all my piano recitals. My parents told us we could become anything we wanted. Nothing was off limits based on gender — not from their perspective.

I know it wasn’t always that way. Though all four of my grandparents attended college, my grandma and grandmother stayed home to raise their children. That’s just how things were done. Until a few decades ago, women were discouraged — if not forbidden — from entering my two chosen fields, journalism and medicine. Now, both those professions not only accept but also encourage women.

Medical school classes are now about 53 percent male and 47 percent female — almost equal — according to 2012-2013 data from the Association of American Medical Colleges (AAMC). When I applied to medical school in 2013 I approached medicine as an equal-opportunity profession.

Surgery is another story. My awareness of the disparity began anecdotally. As the daughter of a doctor, I had heard surgery was male dominated. My gynecologist recently told me that if she was in medical school now, rather than in the early 1990s, she might have become a general surgeon. Women just didn’t get surgical residencies then, not consistently, she told me, so she chose a specialty that included a surgical component. Hers is one suggestive story. The real numbers are far more dismal than I expected.

Data from the Accreditation Council for Graduate Medical Education (ACGME) — the body in charge of medical residencies in the United States — shows an abysmal number of female surgical residents. ACGME documents from 2011-2012 show that only 33 percent of general surgery and otolaryngology (ear, nose, and throat) residents were women. Those surgical specialties are actually tied for the highest percentage of female residents. Contrast those numbers with orthopaedic surgery, with a mere 13 percent of its residents being women. In neurological surgery, it’s 15 percent. The number of full-fledged female surgeons is even lower because surgical residency programs have actually increased female medical student recruitment in the last few years.

The dearth of women in surgery is not for lack of female interest. A Dutch study suggested that female and male medical students were just as likely to be interested in surgery starting out in medical school. However, men were more likely to maintain this interest and become surgeons.

Some studies speculate that surgery deters women because of the heavy workload and a woman’s desire to have children. But empirical evidence doesn’t bear out lifestyle or family considerations, which likely affect women and men to a similar degree. A Swiss study found that gender had the strongest effect on medical specialty choice; the other two main factors were career motivation and life goals. A U.S. study published in 2011 in Annals of Surgery blamed three factors — traditional male/female gender roles, sexism in the medical environment, and a lack of female surgeon mentors — for the female surgery lag. A British study published in 2013 in the journal Medical Education went further, suggesting the contemporary medical school milieu prevents most female medical students from even imagining themselves as surgeons, so they choose other specialties.

Some might argue that because male and medical students are nearly equal in number, there should be corresponding equality among surgeons. I’m not going to make that argument. My interest is in better health care. If women are opting out of surgery for reasons other than lack of commitment or competence, society is losing significant talent, a serious shortcoming if you consider data from the U.S. Health Resources and Services Administration that predicts an estimated shortage of 21,400 general surgeons in 2020 due to shifting demographics. For the same reason, orthopaedic surgery will need 6,000 more surgeons in 2020 than it has now. Women could help fill that gap.

In addition, patients deserve the choice of a female surgeon — an attitude that came about in the late 1980s, and has persisted. Research also shows that female surgeons tend to be happy with their career choice, reporting a higher level of satisfaction with their specialty than non-surgeons, according to another study.

Gender inequality pervades surgery, as it does many other professions. I don’t know how to resolve this problem, in surgery or elsewhere. I do think it’s a disparity worth fixing.