Woman in the Dunes (Suna no onna) 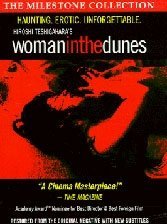 Adapted for the screen in 1964 from Kôbô Abe’s novel by director Hiroshi Teshigahara, the story follows young entomologist Junpei (Eiji Okada), a solitary beachcomber in search of exotic insects in a remote area of Japan. When he misses a bus, locals offer him overnight hospitality. Unwittingly, he allows himself to be lowered by rope ladder into a sandpit. This is his overnight dwelling. But the ladder soon vanishes, and Junpei becomes a prisoner of the widow (Kyôko Kishida) who has spent almost all her adult life in the pit, shoveling away the sands to prevent it from destroying the village.

An enraged Junpei makes tireless attempts to escape the pit, but eventually resigns himself to making love to the widow who had at first repulsed him. Like similar scenes from Alain Resnais’s “Hiroshima Mon Amour,” the eroticism of Teshigahara’s work arises from the presence of sand on damp skin. Textured and hard, the bodies seem more like those of insects, and it begins to seem that Junpei has at last found his rare critter — the one that will launch him to notoriety back home, if he can ever return.