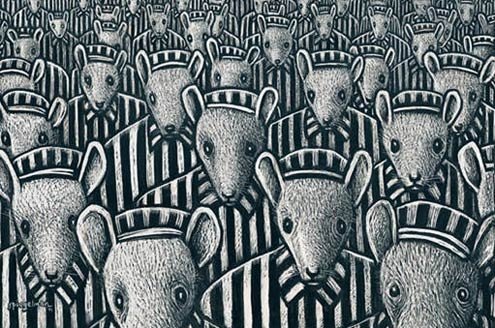 hen the gynecologist learned the baby was due around New Year’s, he warned he might not be there. “Only the poor and uneducated have babies in August or over Christmas. The rich plan better,” he said.

My Milan in-laws were unconcerned. Like good Milan families, we would certainly have our child at the Mangiagalli hospital in the care of “La Baldini.” Unless anything went wrong, you hardly needed a doctor. Even my gynecologist agreed. Just pay La Baldini — an 80-year-old, retired obstetrical nurse at a public hospital — 500,000 lire (then about $350) and she’d take care of everything, alert the gynecologist (if he wasn’t on call), deliver the baby, and assure that the patient got a private room.

Everyone swore by the woman, so I accepted the offer of an introduction from a cousin whose four strapping children seemed like a good endorsement. We visited La Baldini at the maternity ward, where she lived in an apartment. I wasn’t impressed and it didn’t take me long to decide my first-born could enter the world without this avaricious crone’s help.

In the end, the baby arrived too quickly to even bother calling my doctor. Though La Baldini lurked outside, it was her successor who delivered my healthy boy. Clean and swaddled, he was brought to me and then whisked away. I was then transferred to a gurney and left in the hall, where I spent the night torn between fear of wetting the bed and climbing down to find a bathroom.

After the night in the corridor, my husband overrode my American scruples about making cash payments to retired public employees and fetched La Baldini. She apologized about the gurney, but said I’d have to stay there until a bed in a ward was available. A private room? Che peccato, she said, all of them were booked until the day of my scheduled release.

Regrets about not entrusting myself to La Baldini deepened when I reached my ward around noon. It looked like the Crimean war minus Florence Nightingale; five peeling iron bedsteads, five steel lockers, and five new mothers. A dusty Crucifix hung on the wall over the bed and a meter-long dust strand dangled from the ceiling light.

Why, I wondered, hadn’t I just stuck the Milanese rite and let La Baldini handle it all from the start? Why had I chosen Crimea and four strangers over the certainty of a private room (and my final solitude for decades?)

Though I’d been forewarned that showering was better done before my stay and that I’d need a personal supply of toilet paper and disinfectant, I wasn’t prepared for the full Mangiagalli treatment. To wash us, the hospital had evidently hired ex-prison camp guards (those too lazy to run for South America). They arrived in teams of three at 5 a.m. Guard One spread your legs. Guard Two poured freezing water “down there” from a teakettle, whose cozy shape lulled you into thinking it would be warm. The chill numbed you for Guard Three, who slapped a cotton pad the size of a dog bed onto a part of you that was still sore.

The doctors weren’t much better. During rounds, the pediatrician grabbed the book from my hand and the glasses off my nose. “This one’s an intellectual,” he announced. There were nuns who sold magazines and candy and offered to take patients to Mass, but they avoided me. I wondered if the hospital wrote “non-Catholic” on our charts. Or maybe nuns had a sixth sense for non-believers? Turns out they were just scared. The cover of the book I was reading, Art Spiegelman’s Holocaust graphic novel, “Maus,” had a mouse skull and giant swastika.

Soon, post-partum hormones softened my La Baldini regret. The bathrooms suddenly seemed less like the ones at highway rest stops. Soon the loudmouth from Naples in Bed One ceased to annoy. She was on child number five and her huge family barged in whenever it liked, spreading themselves and food across our beds. The chaos brought cheer and pizza, panettone and pasticciera napolitana, both of which beat the hospital minestrone.

The ward also provided a tireless audience, with neo-moms happy to wallow in childbirth’s gory details. We bonded over babies and post-partum cramps (which no one warns you about). We traded hairdresser magazines (no takers for “Maus”) and I gave some flowers to a mother who had none.

Together we hobbled down the hall to see our babies in the nursery window. Bathrobes and dirty hair made us look alike. On the other side of the plate glass window, the tightly-bundled babies looked alike too. All were pink and clean and unmarked by life.

But our families were not alike. Mine was up-and-coming, full of well-educated professionals with cashmere sweaters who spoke Italian and English grammatically. In the other beds were a Philippine family, neat, clean and shy, and a scary Italian one, whose faces looked like illustrations from a 19th-century treatise on the physiognomy of delinquency.

I wondered: We had all been tiny pink bundles once, even the delinquent-looking one. What had gone wrong for them? Would it go wrong for their baby too?

Two decades later I find myself in Milan for New Year’s — just out of the hospital again — this time with a messily broken leg. My first-born is on his way home. He’s admittedly no longer a pink bundle, but what he has become is almost more than those young parents would have dared hope.