Woes of the True Policeman 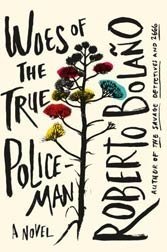 Reflecting on a chaotic life odyssey whose sexual, geographical and ethical twists have by turn fascinated, perplexed and amazed him, Bolaño’s final narrator, a disgraced literature professor named Óscar Amalfitano, gradually realizes what “in his heart he had always known: that the Whole is impossible, that knowledge is the classification of fragments.”

The observation is appropriate since Bolaño unfinished final “novel,” which he began in the 1980s and worked on in patchwork style until his 2003 death of liver disease, is the speech and rant of fragments. It is a pastiche of fissures that flow concentrically backward, beginning with the introduction of Chilean exile Amalfitano, a widower with a teenage daughter who leads a drab teaching life in Barcelona (“a clown,” he calls himself) until a homosexual affair with a student forces him to resign. Amalifitano’s only alternative is a philosophy teaching job at a backwater college in Mexico, Bolaño’s rogue stomping ground, where the lonely professor’s wet dog story yields a spray of unresolved sexual longing, of tales of real and fictitious writers, of inbred local history and folklore, of Mexican families torn apart by too much or too little loyalty. Within this wild but coherent mix is a portrait through letters of Padilla, Almalfitano’s Barcelona lover, at work on a novel called “God of the Homosexuals,” and a sing-song palaver of Sonora cops, who are bored, indolent, scheming, and forever around whores, a few murdered, some on the edge. Culture, such as it is, never strays far from a bordello’s ethical reach.

Bolaño’s peerless command of narrative connection ensures that no aside he bargains with is entirely unrelated to fate of the dispossessed Amalfitano, who, along with Padilla, furnish whole tribes of ideas. The people around Amalfitano are lovers, hookers, admirers, cops, their anecdotes furnishing what amounts to a hail of cultural, critical and historical machine-gun fire, a summation in style of Bolaño’s own life likes, dislikes and flameouts. Throughout, Bolaño sounds every bit like what he was, a hyper-erudite, gorgeously intelligent, south-of-the-border Beat Generation-esque storyteller with an equal penchant for insight and insults and a strong will to observe life and live it, that which he didn’t have much time left to do in the final chapters, which this glass-half-full novel demonstrates to an almost painful degree, particular toward the end, as Padilla fights AIDS.

These fleshed out chapters see Bolaño urgently conjugating himself through Amalfitano, a “gypsy” and “wandering queer” who’s learned far too little too late and is now running on fumes, someone who appears to magnetize random events, but they’re not random at all, since each and every fragment and every character is classified, portrayed, recounted and made vivid if not Whole, honoring Bolaño’s legacy as one ever rife with lonely but passionate outcasts.